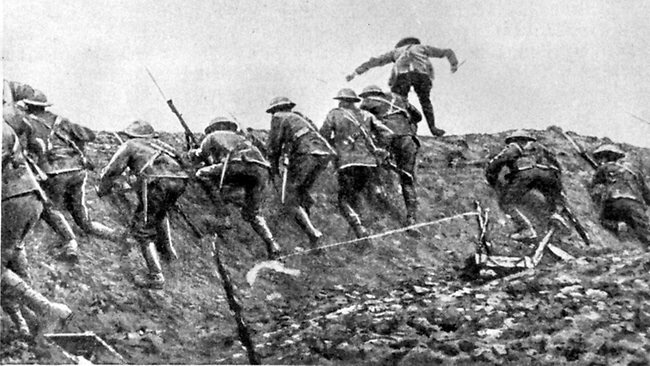 Soldiers killed at the battle of The Somme will be remembered in a full weekend of commemorations in Salford in July – including the world premier of a new, musical tribute.

Around 650 Salford men – most of them in the Salford Pals battalions of the Lancashire Fusiliers – died on the first day of one of Britain’s most brutal battles.

Civic leaders, school children, musicians and the general public will pay tribute to them as part of the national day of commemoration on Friday July 1 – which was once known as Thiepval Day in Salford.

Thiepval today hosts the largest British battle memorial in the world, commemorating the 72,195 missing British and Commonwealth men who fell on the Somme battlefield and have no known grave.

City Mayor Ian Stewart said: “The Somme is remembered as one of the most shocking and tragic battles of World War One. Sixty thousand men died in the first day alone – and the battle raged from July to November, claiming a million lives in total.

“Everyone in Salford would have been affected by this tragic loss of life and it’s fitting that, 100 years later, we still remember and pay tribute to the brave men who fought on that dreadful day.”

The day will begin at 7am with a peal of bells at Sacred Trinity Church, the parish church of the Salford Pals, followed by a memorial service in Fire Station Sq. The Royal Fusiliers Regiment will take part in the service in recognition of the fact that many Salford men went to church with their regiment before heading to the front. A second afternoon service will be held at the church at 3.30pm.
Salford Museum and Art Gallery will be open all day screening the original 1916 record of The Battle of the Somme, courtesy of the Imperial War Museum, alongside a small display. Visitors will be able to handle World War One objects from their collection.

Salford City Council will hold a memorial ceremony at the Civic Centre, Swinton at 11am where two wreaths will be laid – one in memory of all the Salford men who died and one in memory of over 200 council workers who fell in the battle.

This will be followed by two World War One themed performances from the Honour Choir at the University’s new amphitheatre at their Peel Park campus at 3pm and 5pm. The Honour Choir brought together hundreds of local people to mark the centenary of the outbreak of World War One and has continued to perform since.

The day will close with a special evening concert at Salford University’s Maxwell Hall featuring the BBC Philharmonic Orchestra, the Manchester Chamber choir and soloists. The first half will feature works by UK composers George Butterworth and Cecil Coles who died and Ivor Gurney who was shot and gassed in the Somme battle.

The second half of the concert will feature the world premier of Professor Davismoon’s God’s Own Caught in No Man’s Land, specially composed for the occasion. It will be recorded for broadcast on BBC Radio 3.

Professor Davismoon said: “My work is an aural memorial to the fallen of the Somme particularly the Salford Pals who experienced terrible losses during the battle.

“The work sets real people’s experiences of this tragic era of history to music and it also includes the poetry of Salford-born Winifred Letts, which provides a rarely seen perspective of the First World War from the point of view of the women who were left behind in Britain and who also suffered terribly.”

And on Sunday July 3, the Salford Armed Forces Veterans Network will hold two services – one at St Clement’s Church, Ordsall which houses memorials to those who fell in the Somme and one at the Royal British Legion, Pendleton.