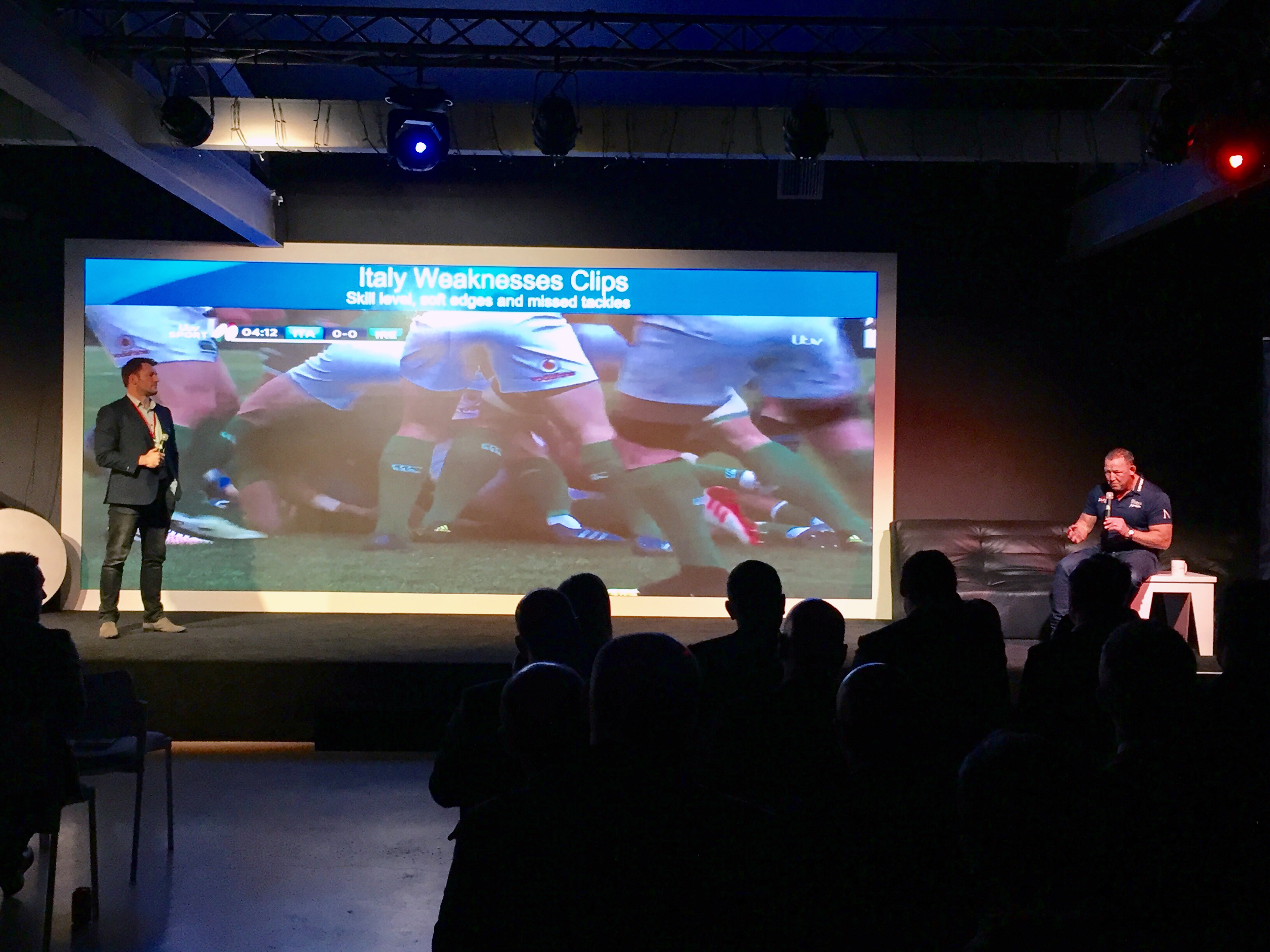 Technology has played a major part in Sale Sharks having the best injury record in Premiership Rugby over the last six years, according to the club’s Director of Rugby Steve Diamond.
Diamond, speaking on stage at an exclusive networking event at the campus of Sale Sharks’ headline sponsor UKFast, said everything including how much sleep players get each night, to food and drink intake and GPS tracking all get fed into a central server at the club’s Carrington training ground.
During the session, Diamond also ran the audience through unique video analysis of the England team’s performance in the Six Nations competition so far.
The 48-year-old and Sale Sharks ambassador and commercial director Mark Cueto, also answered questions from the crowd which included seeking their opinions on parallels between business and sport.
On technology in rugby Diamond said: “A big part of how rugby has developed in the last 20 years is the ability to review game footage. When I first started coaching we had VCR.
“Now, within 10 hours of a final whistle all our players will have every single part of the match downloaded on their iPhones.
“They are expected to look at that. We don’t police it. But when you have ambitious lads like we have they are all eager to learn from their mistakes. It’s one of the best ways of learning.”
He added: “Technology is massive in our sport and it’s getting better by the year.We have the luxury of learning more about players. The modern-day player also embraces it because the more information they have, the more they benefit.
In fact, there’s a statistic that you don’t see much in the press, which is that Sale Sharks have the best injury record of the last six years in Premiership Rugby.

Take Rob Webber for example, who plays hooker for Sale Sharks.
“His wife had a baby four weeks ago. We know straight away that he’s not going to get as much sleep. We monitor his workload in training. If he is training hard three or four days a week with no sleep, we know the injury risk increases, especially soft tissue injuries. So, we monitor it, wonderfully well actually, with the sports scientists we have in place who look after our players.”

Mark Cueto, now 37, saw technology rise in rugby during his early playing days at both Sale and for England.
He told the audience: “Initially when technology came in, particularly the GPS tracking, we were a bit defensive because we thought it was primarily a tool to make the players train harder.
“I remember preparing all week for an international against Argentina. The average distance each player covered in a week of training was 25km and we lost.
“The following week we ran 9km on average in training and went out and smashed Australia by 25 points. To me that says, particularly with the way technology is used in the game today, that technology isn’t always a tool to point at players and get them to work harder. A lot of the time it’s being used to manage them, their wellbeing and pull them back a bit if needed.”
During the event Diamond also predicted that England will score a minimum of 45 points against Italy at Twickenham in the Six Nations this weekend.
The Sale Sharks Business Club event in partnership with red cow media was attended by business leaders from a variety of sectors.