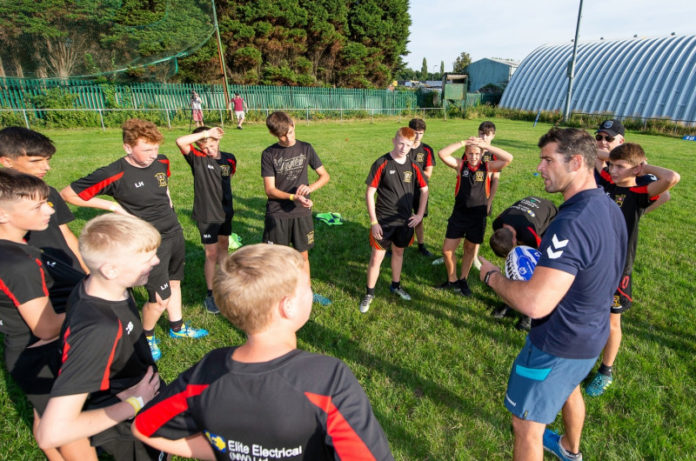 Rugby league is improving life satisfaction and increasing aspirations in communities across the north of England, according to a new report from Manchester Metropolitan University.

The ‘Rugby League Dividend Report’, commissioned by the Rugby Football League (RFL) and produced by the Sport Policy Unit within Manchester Metropolitan’s Future Economies Research Centre, has valued the wide social and economic impact of a sport promoting social mobility at the heart of disadvantaged communities.

A four-fold return on social investment by the sport’s grassroots clubs and evidence of rugby league’s reach, visibility and value beyond its core followers is also presented in the research.

Professor Richard Greene, Pro-Vice-Chancellor for Research and Knowledge Exchange at Manchester Metropolitan, said: “This important report evidences the significant contribution that the sport of rugby league makes to communities and the nation beyond sport.

“In addition to its economic impact, rugby league successfully capitalises on its ability to reach core disadvantaged communities, contributing positively to social cohesiveness, the identity of towns and cities, aspiration and provides positive role models.”

Speaking on the launch of the Dividend Report, current Leeds Rhinos and England rugby league player Jamie Jones-Buchanan, said: “As a Super League and England player I can say that the sport has given me a great deal. Even more in my role with a Rugby League Foundation I see first-hand the powerful differences the sport makes to huge numbers of people in communities like my own.

“It is the social glue that still binds us together in communities where much has changed and some can feel marginalised. It cares for people and opens eyes to opportunities on and off the pitch. We are on the ground, real and relevant. Investment in Rugby League helps clubs and Foundations play even more of these vital roles in communities and helps level the playing field when people face disadvantage and challenges in life.”

In producing the report, Manchester Metropolitan’s researchers considered the array of services and opportunities offered through the charitable foundations of professional rugby league clubs and grassroots clubs.

This ranged from education to mental health, dementia support, diversionary activities reducing crime, alongside exercise, healthy eating and all formats of rugby league.

Mayor of Greater Manchester Andy Burnham, who championed the research in his voluntary role as RFL President, added: “I am delighted that, on behalf of the sport, the RFL has embarked on a series of independent research and insight activities, to demonstrate in particular the social impact of Rugby League. This ‘Rugby League Dividend’ report is the first in the new ‘RL Impact Series’.

“This report highlights the central and varied role that clubs and charitable foundations play at the heart of their communities in providing vital social hubs and outreach activities which extend far beyond the provision of regular sporting opportunities for children, young people, women and men; and the considerable value of those services and activities.”