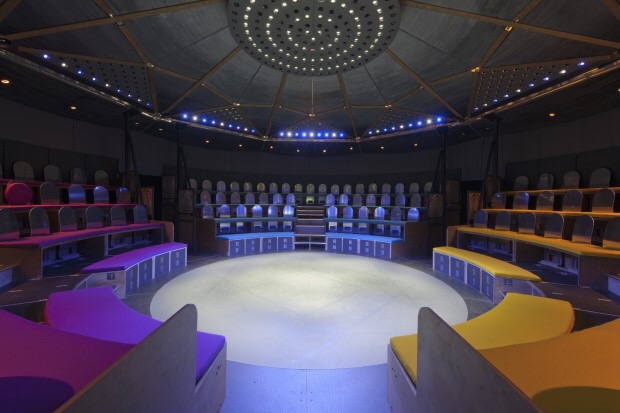 Designed designed by touring theatre company Paines Plough, it is the world’s first plug-and-play theatre. The portable 160 seat venue, which flat packs into two lorries, is pitching up outside The Lowry with a six day programme of family shows, stand-up comedy and new writing.

The Roundabout programme includes three plays, The Human Ear, Lungs and Our Teacher’s a Troll, all commissioned by Paines Plough and performed by Sian Reece Williams and Abdul Salis. Welsh actress Sian Reece Williams is best known for playing ‘Gennie’, one of the infamous Dingle family, in ITV1’s Emmerdale for 5 years. Abdul Salis played the role of Tony in the 2003 film Love Actually, alongside Martine McCutcheon and Hugh Grant.

In The Human Ear, by Fringe First Award winner Alexandra Wood, a man arrives claiming to be Lucy’s brother. After 10 years the pair are forced to confront the messy inner workings of sibling love. Lungs, by Duncan MacMillan, follows a thirty-something, educated and thoughtful couple deciding what are the right reasons to have a child.

Our Teacher’s a Troll is written by Dennis Kelly, the writer of multi award-winning West End hit Matilda The Musical. Two terrible twins with a talent for turmoil rule their school with terror and tyranny – until the arrival of a new head teacher with green scaly skin, sharp gnarly fangs, and a long spiky tail…

Salford-born stand-up Jason Manford handpicks the brightest comedy acts on the circuit to perform in the intimate Roundabout setting in Manford’s Comedy Club. The show is hosted by Jason’s brother Colin Manford and includes stand-up from Ria Lina and Gordon Southern.

The Roundabout programme also includes Ten Tiny Plays About Football (Sat 19 September), a celebration of the beautiful game by the fans themselves. Monkeywood Theatre asked fans of Manchester City and Manchester United to tell their own stories about what it is to be a football fan. Ten of these five minute plays will be performed script-in-hand by professional actors in the Roundabout.

Tuck Shop (Wed 16 September – Thu 17 September) from award-winning ensemble Not Too Tame give audiences a bit of what they fancy with the best new writing, fresh live music, bags of retro sweets and very special local guests.

Family show Maggie and the Song of the Sea (Thu 17 September – Sat 19 September) explores the journey of grief through the eyes of a child. This honest and uplifting story tells the tale of how a very special little girl rediscovers what she thought was lost and learns to find her music again, with physical theatre, puppetry and live music.

The Plaza (front entrance to The Lowry)

For details of the full Roundabout programme click here.

Head for the bottomless Brunch at Revolución de Cuba this weekend