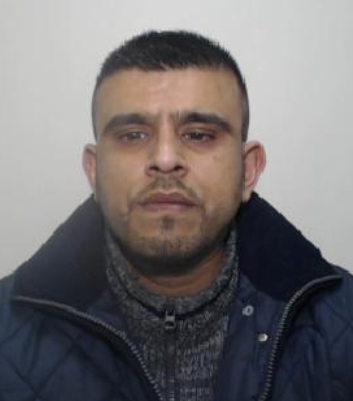 A man involved in child sexual exploitation in Rochdale in the early 2000s has been extradited from Pakistan, following a successful GMP-led operation.

Choudhry Ikhalaq Hussain aged 42,formally of Mayfield Terrace, Rochdale was flown to the UK today after being arrested in the province of Punjab on Saturday.

Hussain had fled, part way through his 2015 trial, which was one of a series launched under the umbrella of Operation Doublet; a large scale police investigation formed in 2012 to investigate reports of historic child sexual exploitation between 2003 and 2013, predominantly in the Rochdale area of Greater Manchester.

In April 2016 Hussain was sentenced in his absence to 19 years imprisonment after being found guilty of three counts of sexual activity with a child, two counts of rape and one count of conspiracy to rape.

GMP – with assistance from national and international partners – have been pursuing Hussain ever since.

“Hussain is a sexual predator who mistakenly thought he could flee to another country to live the good life, while his victim was forced to deal with the consequences of his vile actions and robbed of justice. His apprehension demonstrates that when it comes to pursuing perpetrators of child sexual exploitation, we will hunt them across the globe if necessary.

“His extradition is an overwhelmingly positive result for GMP as well as agencies – including the National Crime Agency, the Foreign and Commonwealth Office, the British High Commission in Pakistan and the Pakistani authorities – who’ve worked in partnership with us for a number of years in order to catch Hussain and bring him back to the UK. It would be remiss of me not to also take this opportunity to thank the original NHS Crisis Intervention team, Rochdale Metropolitan Borough Council and St Mary’s Sexual Assault Referral Centre in Manchester. They have supported us from the very outset and were integral to the original court outcomes.

“Most importantly though, I must once more, publicly commend the bravery and courage of Hussain’s victim, who was subjected to the most horrific abuse. For her sake above all, we have always remained determined to catch Hussain – regardless of how much time passed or distance he travelled; and I do hope this extradition provides her with a measure of comfort as she can continues to rebuild her life.

“Today’s extradition demonstrates our dedication to ensuring criminals face justice. No matter how many years have passed, we will do everything in our power to ensure dangerous predators like Hussain are caught and face up to their abhorrent crimes. I hope that this news serves as a stark warning to abusers that this kind of behaviour will not be tolerated. I also hope it sends a clear message to those who think that they can flee to the other side of the world to avoid serving a prison sentence –we won’t stop until you are put behind bars.”

Dr Christian Turner, from the British High Commission in Islamabad, said: “This latest example of close co-operation between the UK’s and Pakistan’s law enforcement agencies shows there is no escape for those who flee from the law, even across international boundaries. Choudhry Ikhalaq Hussain will finally face jail for his terrible crimes. This is down to the hard work and excellent collaboration between Pakistan and UK authorities, including the Federal Investigation Agency, the Punjab Police, Greater Manchester Police, and teams at the British High Commission in Islamabad.”

GMP launch new operation in bid to crack down on money laundering and organised...