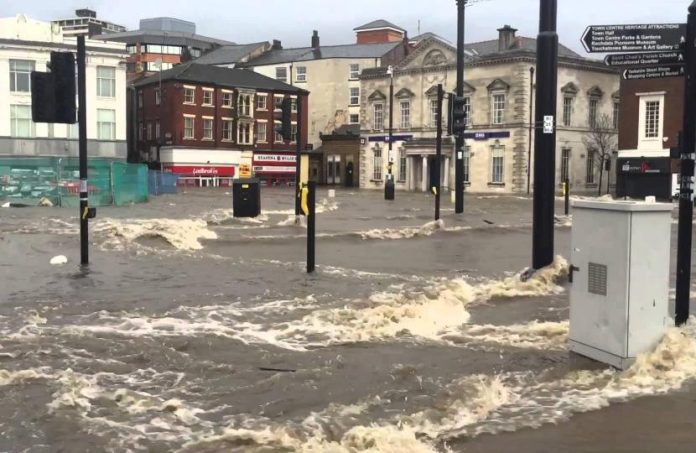 Bury is to receive £7 million towards drawing up a comprehensive flood defence plan for areas hit by the Boxing Day floods of 2015 while Rochdale iwill receive a total of £5 million to develop one of the largest inland flood schemes in the region.

The defences in Rochdale will increase the level of flood protection to 1,000 residential properties as well as critical infrastructure such as the tram network, a bus station, a grid sub-station and a waste water treatment works.

In Bury more than 700 houses and businesses in Radcliffe and Redvales were directly affected when Storm Eva brought unprecedented flooding of the River Irwell, along with a major power cut, disruption to roads and damage to the sewage treatment works.

Since the floods, Bury Council has been working with the Environment Agency to explore ways to better protect the area. This has included the potential development of a new £46 million flood defence scheme, protecting 870 properties.

The council had pledged £2 million towards the cost of new defences, and the Government’s announcement that it will now provide £7 million to bridge the gap in the cost of the project means that the Radcliffe and Redvales scheme can now move into its next stage.

Councillor Rishi Shori, leader of Bury Council, said: “I am delighted by this news. Finally, after many months of lobbying the Government, we are at last being promised the money we need to take our flood defence plans forward to protect our residents from the sort of devastation that they suffered nearly three years ago.

“While the physical damage caused by Storm Eva may no longer be visible, the emotional and physical scars still remain for those people affected. It is vitally important that a flood protection scheme is put in place as soon as possible, in order to give them peace of mind.

“It should never have taken this long to get what our residents deserve. It is now imperative that no more time is wasted and work gets under way on bringing these essential defences to Radcliffe and Redvales.”

Now could Debenham’s be under threat?