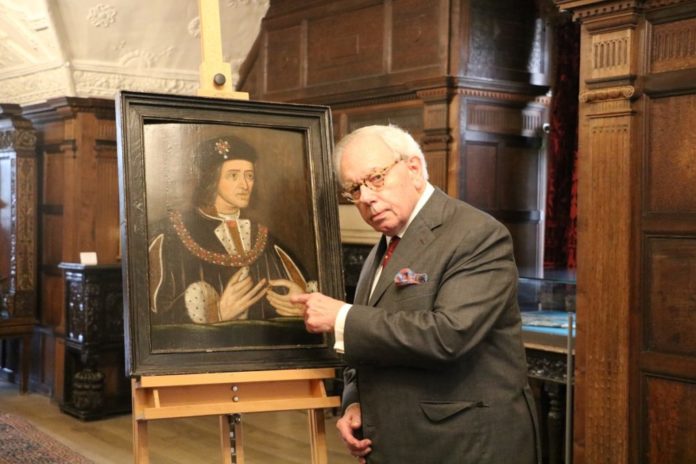 A late 16th century portrait of Richard III is now on display at Hever Castle for the first time – 567 years to the day he was born (2 October, 2019).

The painting of the monarch – which has never been publicly displayed before – was officially unveiled in the Castle’s Long Gallery by historian, Dr David Starkey.

This late Tudor portrait of the monarch is an example of the only painted portrait-type of Richard, best known from a 16th century panel in the collection of the National Portrait Gallery. The portrait-type probably derives from a now lost original that was painted from life.

This portrait, in which he appears to be placing a ring on the little finger of his right hand, has been seen by some as evidence of his scheming nature (the way he is toying with it) and by others as evidence of his humanity (at the time, a ring such as this was a symbol of love and faithfulness and associated with marriage). It all really depends on what you personally think of the King’s character.

Controversy surrounded Richard III’s reign, namely the accusations that he murdered his nephews to become King and he only reigned for two years before he lost the Battle of Bosworth to Henry Tudor who had the weakest claim to the throne in English history.

Richard III continues to intrigue with the discovery of a body in a car park in Leicester, purporting to be that of Richard gaining nationwide headlines in 2013.

Dendrochronological analysis of the panel on which the portrait of Richard III is painted suggests an earliest possible usage date of 1586 upwards. The work has been in private collections for many years.

In the late 16th and early 17th centuries, the corridors and Long Galleries of noble houses were hung with collections of panel portraits. Reflecting Tudor fascination with dynastic matters, these collections were displayed as part of a historical narrative of English monarchy. It is for this purpose this painting was likely created, and it will be displayed in a similar setting at Hever Castle more than 400 years later.

Hever Castle has one of the finest collections of Tudor portraits in the country, thanks to owners the Guthrie family who have built the collection since taking over running the Castle in 1983. This portrait of Richard III will take its place in Hever Castle’s Long Gallery as part of a permanent display opened in 2018, curated by Dr Starkey.

Eighteen original portraits chronologically depict the dynastic saga of one of the most universally fascinating eras in English History – from the Wars of the Roses to the Reformation – beginning with Henry VI and concluding with Henry VIII. The Long Gallery, which was created in 1506 by Thomas Boleyn, Anne’s father, has been faithfully restored by a team of experts so it now resembles how it would have looked during the 16th century.

Dr Starkey says: “Richard III was the principal missing link in Hever’s remarkable collection of historic portraits. I am delighted that the gap has now been filled by this intriguing picture.”

Hever Castle Chief Executive Duncan Leslie says “I am delighted that we have been able to purchase this painting and further enhance the historical experience we offer here at Hever Castle. It is an important addition to better tell the story of the Tudors, or rather how they came about.”