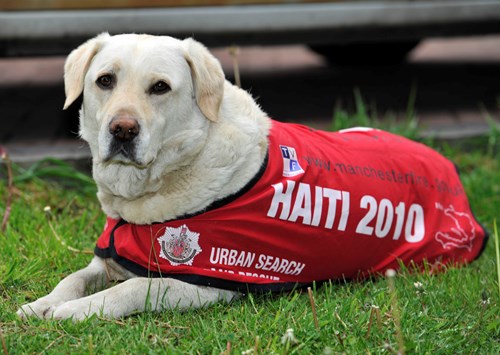 RETIRED Greater Manchester Fire and Rescue Service dogs are to be awarded a prestigious accolade widely regarded as the animal’s equivalent of the OBE.

The People’s Dispensary for Sick Animals (PDSA) Order of Merit will be awarded to former Search and Rescue dog Echo and retired Fire Scene Investigation dog Cracker in June.

The initiative recognises animals that display outstanding devotion to their owner or wider society and exceptional examples of the special relationship between animals and humans.

Recipients could include service animals, such as those in the police force, assistance dogs or medical detection dogs.

Fire Investigator and Dog Unit Manager Mike Dewar said: “It is a tremendous honour for GMFRS dog team to be given such a prestigious award.

“It recognises the fantastic work they do in helping to keep our communities safe and educating people in the dangers of smoke and fire.”

During his service Echo attended approximately 70 incidents and assisted in many multi-agency events both in the UK and overseas.

He can add this to his collection which includes the Pride of Britain award, IFAW animal of the year 2010, hero dog of the year 2010 and Cruft’s friends for life award 2011.

Cracker had a chief superintendent’s commendation for her work at a rally in Bolton in 2009, searching for petrol bombs hidden in Queens Park.

She was directly involved in the conviction of over 30 arsonists and attended approximately 500 incidents during her career, along with over 1000 events and open days

The Order of Merit ensures that all extraordinary animal contributions to society can be formally recognised.To date, they have given the honour to 10 police horses and 7 dogs.

Burnham warns of danger of a “second spike” of the disease.