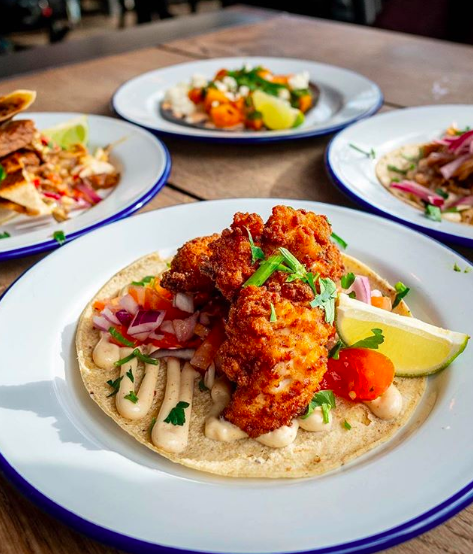 Set to launch this summer El Camino at The Cotton Factory will be the first of an ever-evolving food and drink offering, with an abundance of pop-up feasts in collaboration with up and coming new food traders showcasing cuisine from all over the globe.

The series of pop-up dining experiences starts this summer with local Mexican food specialists, El Camino. Serving their signature tacos and tequila, they will be the first to feature in the 78 cover restaurant with an open plan kitchen, hidden private dining room and a new bar.

El Camino, which hosted its first pop-up in Urmston earlier this year, has created a bespoke menu for The Cotton Factory to include authentic Mexican dishes alongside tacos and burritos, all served with quality tequila cocktails and a host of Mexican beers. There will be homemade hot sauces, guacamole prepped to order and plenty of options for vegetarians too.

While The Cotton Factory will play host to different themes and iterations hosted by well chosen industry favourites, the main concept will always deliver great quality food, drink and music, with events and parties hosted by the team throughout the year.

The Cotton Factory, named after the mill it calls home, was created by The Initiative Group to enable up and coming food traders to showcase exciting new food and drink menus in the open plan 78-cover restaurant. The bar will remain the heart of the property, with an open plan seating area which will allow diners to flow through the restaurant and into the bar, which will be host further independent traders later this year.

Youri Michel, director from The Initiative Group, said “We have a great space at The Cotton Factory and it is exciting to have the opportunity to fill it with a variety of hungry young operators to create unique one off experiences in the city. El Camino is a great brand delivering something special – we hope to create something even more special together.”

Scott Power, founder of El Camino, said: “We had a brilliant run with our first pop up in Urmston and this is a great opportunity to take our concept to the wider city centre audience with an experienced and creative partner that will really help us make a success of our first residency in town.”

The spectacular atrium which homes the bar, a former street on the corner of Whitworth Street and Princess Street, was transformed as part of the renovation work for Whitworth Locke aparthotel. The glass roof reveals the changing colours of the Manchester sky, with its intricate detail complementing the dimly lit exposed brickwork. The bar dominates the space in the centre of the hotel atrium, inviting guests to sit and soak in the Parisian atmosphere throughout the afternoon and into the night.

Previously a historic cotton mill, Whitworth Locke was transformed by acclaimed New York architects and designers Grzywinski+Pons. The finished development celebrates Manchester’s industrial past whilst embracing its dynamic and creative present and future.

The founding team behind The Initiative Group, originally from France, have launched and managed an eclectic range of hospitality outlets from five-star hotels to nightclubs in London and across the world over the last decade. The team recently secured a deal to launch and manage the F&B outlets at Locke Hotels all over the world, with further projects set to launch over the next two years in Dublin, London, Berlin and Lisbon.

The team behind El Camino will be joining The Cotton Factory for a three month residency with the restaurant set to open early July. Reservations are recommended and will be live from the 1st June.