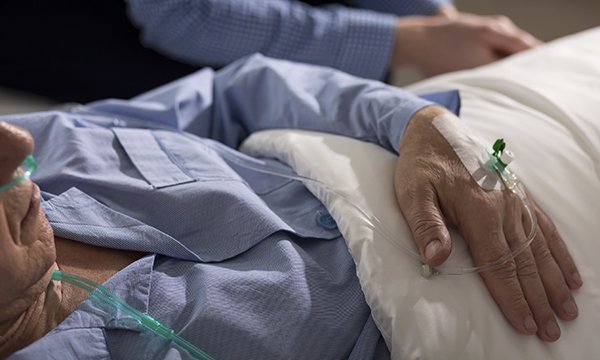 A new report warns that the ‘traumatic’ final days experienced by patients sent home or to care homes to die without adequate support and resources could become the ‘new normal’ without significant reform to England’s end of life care services.

The analysis by the IPPR think tank found that annual deaths are projected to overtake rates seen during the 2020 pandemic year spike by 2031 – potentially exposing end of life services to the same pressures faced last year, every year from 2030 onwards.

The report attributes the growing death rate to the country’s rapidly ageing population, with the over-60 population in England estimated to grow by more than 15 per cent between 2018 and 2031.

In addition to the increasing number of annual deaths, the causes of death are also changing. The researchers note a rapid rise in conditions, such as Alzheimer’s and dementia, that often require long term support in care settings rather than hospitals. Meanwhile, more cancer patients are living longer, but with long-term and complex treatment needs.

This underscores the need for more capacity, training and resources in end of life and palliative care, according to the report.

The experience of Covid-19 shows that end of life care services are not ready to cope with a substantial increase in demand. New analysis shows that, amongst people who died of common non-Covid causes, there was a 23 per cent rise in care home deaths and a 36 per cent rise in deaths at home in England in 2020 – putting the equivalent of 15,000 people at risk of poor care.

The authors argue that this unplanned and unfunded shift meant too many people faced their final days without the right support, resources and services, often leading to undignified deaths and poor practice, including non-consensual ‘Do Not Resuscitate’ orders.

The report argues that unlike the unplanned rush to community and home end of life care during the pandemic, a well-planned, well-resourced, and well-staffed shift to care in the community and private homes can mean more personalised care, higher quality of care and better use of resources. A successful transition would leave end of life care services better able to cope with the rising demand in years to some, according to the authors.

The researchers argue that the NHS is right to prioritise shifting patients to community care where medically possible. However, the analysis of the state of England’s end of life care services by a collaboration including Imperial College London, the University of Edinburgh and University of Lausanne – among the most ambitious of its kind ever undertaken – found substantial inequality in end of life care provision across England.

The research shows that more affluent areas have greater access to community, hospice and home care options, whereas people in the most deprived areas face the most time in hospitals at the end of their lives. London, the North East and the West Midlands are particularly reliant on hospital treatment and A&E in the last year of life. The report argues that this leaves some areas significantly better prepared for disruptive decades ahead.

The authors argue that getting the shift to community end of life care right will also save the NHS money in the long term. End of life care in the south central region, where the move away from an antiquated hospital-based model of end of life care is most developed, is £1,500 cheaper per patient (20 per cent less) compared to the region most reliant on more expensive and less preferable hospital care. This is money that can be reinvested in better NHS services across the board.

“The pandemic showed the consequences of trying to tackle a huge spike in deaths without the right, proactive funding, workforce, training and coordination. In too many cases, it meant traumatic final days for dying people – and for their friends, family and loved ones too.

“The grim reality is that total annual deaths will reach pandemic levels by 2031 – and without proactive planning, this risks an eternal 2020 in end of life care. To prevent this, the government must put in place hospice quality community care across the country to guarantee a dignified death for all.

“Too often, we find it difficult to talk about death and dying, but we must overcome that hesitancy to boldly confront the challenge ahead.”

“We share the concerns that the IPPR has raised today about the need to learn lessons from the rush to community-based end of life care during the pandemic, which left too many people dying in private homes and care homes without the care, support and dignity they deserved.

“For too long, those who have been underprivileged in life have struggled in death.  We welcome the IPPR’s focus on tackling health inequalities and ensuring hospice-standard end of life care and support is made available in all settings, including the community.”

Covid self isolation period for contacts and holiday quarantine is to be cut from...