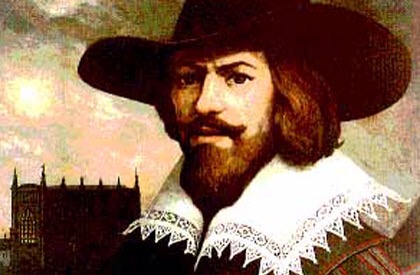 It is four hundred and fifteen years since the discovery of a consignment of gunpowder in Westminster, what role, if any did this part of the country play.About Manchester takes a look.

Legend has evolved that Manchester was at the heart of the 1605 Catholic plot to blow the Protestant King James and his Parliament into the next life and that Ordsall Hall was the location for Guy Fawkes and Robert Catesby to plot the subterfuge.

The truth is however mired in legend, none more so than the publication in 1841 of Manchester born William Harrison Ainsworth’s novel Guy Fawkes, or The Gunpowder Treason: An Historical Romance.

It depicts Fawkes traveling through Manchester in a story which many people have accepted as authentic history.

The story tells of Viviana Radclyffe, daughter of Sir William Radclyffe of Ordsall Hall, who is away attending a meeting of Catholic gentry at Holt in Cheshire who meets Fawkes, who has come to secure the support of the Radclyffes in the Plot along with Robert Catesby.

The hall is raided and Catesby, Fawkes, and the priest are rescued by Humphrey Chetham , who conducts them by a secret passage running beneath the moat to a summer-house in the grounds, and thence through Old Trafford to Chat Moss.

During his visit to Manchester Fawkes is entertained by the landlady of the Seven Stars in Withy Grove related in this passage from the book:
“After much debate, it was decided that their safest plan would be to proceed to Manchester, where Humphrey Chetham undertook to procure them safe lodgings at the Seven Stars, – an excellent hostel, kept by a worthy widow, who, he affirmed, would do anything to serve him.

Accordingly, they set out at nightfall, – Viviana taking her place before Guy Fawkes, and relinquishing Zayda to the young merchant and the priest. Shaping their course through Worsley, by Monton Green and Pendleton, they arrived in about an hour within sight of the town, which then, – not a tithe of its present size, and unpolluted by the smoky atmosphere in which it is now constantly enveloped, – was not without some pretensions to a picturesque appearance.”

“Crossing Salford Bridge, they mounted Smithy Bank, as it was then termed, and proceeding along Cateaton Street and Hanging Ditch, struck into Whithing (now Withy) Grove, at the right of which, just where a few houses were beginning to straggle up Shude Hill, stood, and still stands, the comfortable hostel of the Seven Stars. Here they stopped, and were warmly welcomed by its buxom mistress, Dame Sutcliffe.”

The truth though is to say the least vague. Modern Historians will admit that we know little of Fawkes’ movements up to that November.He may well have travelled the country looking for recruits.If he came to Manchester, he may well have stopped at the Seven Stars, being one of the most respected hostelries in the town.

As for the Radclyffes, there is no evidence that they were associated with the Gunpowder Plot. At the time of Fawkes’s reputed visit, Ordsall was in possession of Sir John Radclyffe and there was never any female of the house named Viviana.

Humphrey Chetham was a friend of the family, and he would lend them money in later years when they fell on hard times. His life has been well documented as the founder of the famous school but some argue that there were parts of his private life that were never revealed.

Ainsworth always argued that his book was based on impeccable historian research.

Fawkes had some connections to the North West.His commander in the army of English Catholic exiles in the Netherlands was Sir William Stanley of Hooton in the Wirral. While Lancashire itself was an outpost of the former Catholic England and had never accepted the Reformation.

So maybe Fawkes did visit Manchester and Ordsall Hall? We sadly will never know.

76 year old dies a day after being hit by car crossing the road...