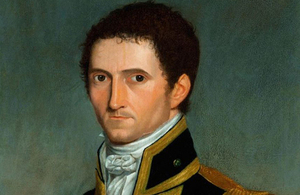 Archaeologists working on the HS2 project in St. James’s burial ground, Euston, have discovered the remains of Captain Matthew Flinders, the Royal Navy explorer who led the first circumnavigation of Australia and is credited with giving the country its name.

HS2 archaeologists were able to identify his remains by the lead depositum plate (breast plate) placed on top of his coffin. The discovery of his burial site among 40,000 other human remains in the burial ground so early in the archaeological dig has thrilled archaeologists working on the project. He was buried at St. James’s burial ground on 23rd July 1814.

Captain (Cpt.) Flinders made several significant voyages, most notably as commander of H.M.S. Investigator which he navigated around the entire coast of Australia. This made him the first known person to sail around the country in its entirety, confirming it as a continent. He is also credited with giving Australia its name, although not the first to use the term, his work popularised its use. His surname is associated with many places in Australia, including Flinders Station in Melbourne, Flinders Ranges in South Australia and the town of Flinders in Victoria.

Following the expansion of Euston station westwards into part of the burial ground in 1840s, Flinders’s headstone was removed and it was thought that his remains had been lost. For a long time, there was an urban myth that Cpt. Flinders was buried under platform 15.

The discovery was made as archaeologists excavate the site where the HS2 station will be built. The archaeology programme is a central part of HS2’s ground preparation works for Phase One of the project, London to Birmingham. The HS2 project is well underway with a programme of work, preparing sites, ahead of main construction this year.

At the bicentenary of his death in 2014, a memorial statue of Cpt. Matthew Flinders was unveiled by the Duke of Cambridge at Australia House and later installed at Euston Station. Virgin Trains also named one of its Pendolino trains “The Matthew Flinders”.

Cpt. Matthew Flinders will be reinterred with the buried population of St. James’s Gardens at a location to be announced.

The scientific study of human remains from St James’s burial ground will better our understanding of life and death in London’s 18th and 19th centuries, shedding light on health and disease, social status and lifestyle. Those buried in the long since demolished chapel and burial ground include individuals from all walks of life: paupers and nobility, artists and musicians, soldiers and sailors, inventors and industrialists, as well as victims of accidents, disease, suicide and murder. Research of the burial records has revealed that a number of other notable people were interred at St James’s, including: Bill ‘the Black Terror’ Richmond – a slave born in New York who became a free Londoner and a celebrated bare-knuckle boxer who was favoured by King George IV and taught Lord Byron to spar.