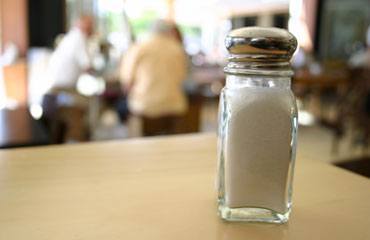 Reducing the UK’s average daily salt intake to within international guidelines could result in 135,000 fewer new cases of coronary heart disease in the UK by 2035, according to new analysis

The analysis by the British Heart Foundation said it could also result in 1.4 million fewer people living with high blood pressure in 2035.

Higher salt intake is associated with high blood pressure, which in turn is linked to around half of heart attacks and strokes in the UK.

Further health benefits include 49,000 fewer new cases of stroke in the UK by 2035, and the population collectively living more than 450,000 extra years in good health.

Average salt intake among English working age adults is currently 8.4g a day, well above the UK’s own guidelines, first recommended in 2003, of a maximum intake of 6g a day.

Following its disappointing omission from the recent Food White Paper, the Foundation are urging the Government to consider a mandatory measure such as the salt levy recommended in the National Food Strategy which would drive manufacturers to reduce salt content, after recent progress towards voluntary targets stalled.

Tracy Parker, senior dietitian said: “This isn’t just about us all thinking twice before reaching for the salt shaker – the vast majority of salt in our food is already there before we buy it.

“This means we may end up consuming far higher levels of salt than we realise, putting us at greater risk of developing high blood pressure, and as a result, heart attacks and strokes. So, Government and the food industry has a critical role to play in lowering the amount of salt we all eat.”

The analysis, conducted by HealthLumen, modelled the potential effect of reducing daily salt intake to UK guidelines by 2024, and to more stringent World Health Organization guidelines of 5g per day by 2030, with this level being maintained until 2035.

The modelling also found that such a reduction in salt intake would generate £11.4 billion in savings through reduced use of the NHS and by also allowing patients and their carers to live fuller, healthier lives.

The ambitious scenario shows how much can be gained by taking decisive action to reduce the nation’s salt intake at a time when there is a pressing need to reduce heart attack and stroke rates.

Preventing cases of high blood pressure is a critical step to achieving the Government’s ambition of adding an extra five years of healthy life by 2035, and central to NHS Long Term Plan aims to prevent 150,000 cases of heart attacks, stroke and dementia over the next decade.

“Progress in reducing salt in the food we eat has stalled in recent years and so the Government must take lessons from the success of the Soft Drinks Industry Levy. We simply must be braver and act now if we’re to overcome this deadly problem.

“We urge the Government to seriously consider introducing a salt levy that will prompt reformulation and keep families together for longer.”

Report warns of ‘eternal 2020’ for end of life care services without expansion of...