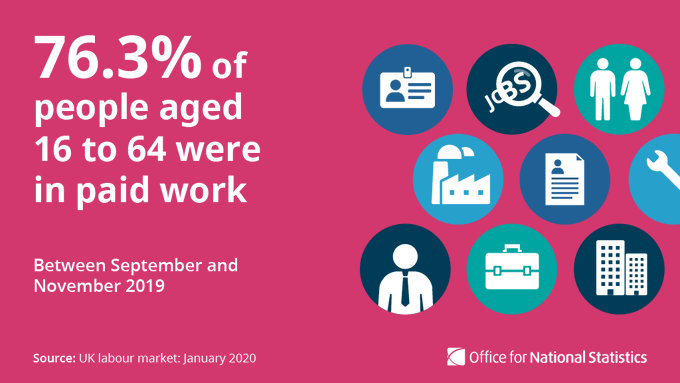 Employment is at record levels according to the latest figures released this morning from the Office Of National Statistics.

The employment rate for all people increased 0.6 percentage points on the year to a record high of 76.3%.

Estimates for September to November 2019 show a record 32.90 million people aged 16 years and over in employment, 359,000 more than a year earlier.

The estimated UK unemployment rate for all people was 3.8%, 0.2 percentage points lower than a year earlier but largely unchanged on the previous quarter.

Meanwhile pay growth for employees (including bonuses) has grown by 1.6% on the year when adjusted for inflation.However Employees’ earnings are still lower than before the 2008 to 2009 downturn after taking inflation into account.

Annual growth in total pay remains weakest in the wholesaling, retailing, hotels and restaurants sector, at 1.8%, and the manufacturing sector at 2.6%.

“The labour market is in good shape as the employment rate hits a new record high.  We’re seeing the strongest employment growth in 10 months with more than two thirds of the growth driven by women. Creating a labour market that supports more women in jobs is critical to achieving a fairer, thriving economy.

“The number of people in self-employment has also pushed above five million for the first time, showing the increasing importance of flexible working. For this to continue, there must be the right digital infrastructure in place with the roll out of full fibre for every home and business.”