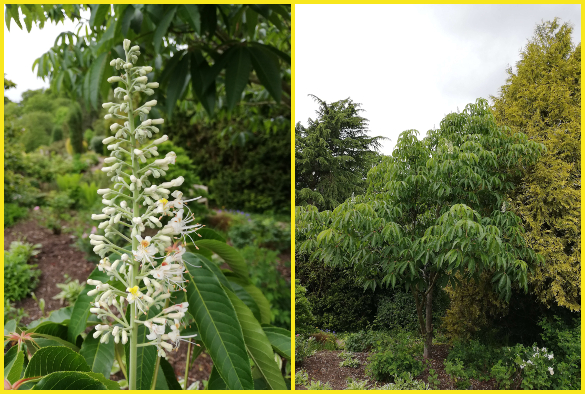 A rare horse chestnut tree has come into bloom at Ness Botanic Gardens, for what is believed to be the first time outside of the species’ native Vietnam.

Aesculus wangii is a rare type of horse chestnut found on mountainous slopes in Northern Vietnam. It can grow to up to 30m tall and is reported to have conkers the size of tennis balls. It also has striking palm-shaped leaves that are coloured burnished red in spring.

It is a rarity in cultivation and is threatened in the wild with forest clearance, especially due to clearance for cardamom production.

Two plants came to Ness in the early 1990s and were some of the first to be introduced successfully to this country. The species can typically can take up to 25 years to flower from seed, although the Ness plants are grafted.

Commenting on the exciting bloom, Ness botanist Tim Baxter said: “We believe this to be the first of this species to flower in cultivation outside its native Vietnam.

“The lack of winter cold has allowed this rather tender species to flower. Normally in colder winters the flower buds are likely to be killed by frost, or at least growth checked significantly to prevent flowering.

“This species should flower every year from now on, but this will be entirely weather dependent so we must enjoy it while it is here!”

Yule be shocked! Over 3,000 tonnes of aluminium will end up in landfill this...