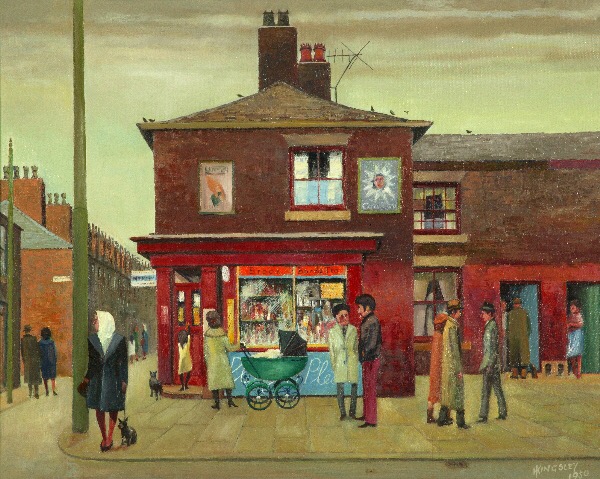 Manchester Art Gallery has given a painting to Beswick Library on a three year, long-term loan by local, little known artist, Harry Kingsley.

The painting, The Grocery Shop, Beswick, depicts an everyday scene from the 1950s, providing a fascinating record of the local neighbourhood that has changed dramatically through nearly 40 years of de-industrialisation and the more recent development of east Manchester and the Beswick community hub.

The loan represents the continuation of Manchester Art Gallery’s commitment to encouraging participation in the arts in local communities – particularly in Beswick after the installation of Ryan Gander’s Dad’s Halo Effect in the neighbourhood.

Although little is known about Kingsley, this new display marks the 100 year anniversary of the artist’s birth in Manchester.

It is known that after losing a leg during military service, he studied at the Manchester College of Art and later taught at a Manchester secondary school.

From his paintings, it is clear Kingsley’s work has a focus on northern towns and industrial scenes – documenting many post-war changes in Manchester. As such, his paintings provide a portal 60 years in to the past – snapshots of daily life.

As so little is known about the artist and his paintings, Manchester Art Gallery urges anyone who has any information about Harry Kingsley’s life, his paintings or Beswick’s heritage to contact the gallery. See contacts below.

The Grocery Shop, Beswick will replace Investigation #99 by Ryan Gander at Beswick Library, which was loaned from the Lisson Gallery – Ryan’s gallery representatives in London.

Investigation #99 is the sculpture by Gander that informed the Dad’s Halo Effect artwork that was revealed last month as the centrepiece of the Beswick community hub – a major regeneration development that has brought the new Connell Sixth Form College and the new East Manchester Leisure Centre to east Manchester.

Manchester presents its finest for the Inaugural This is Manchester awards