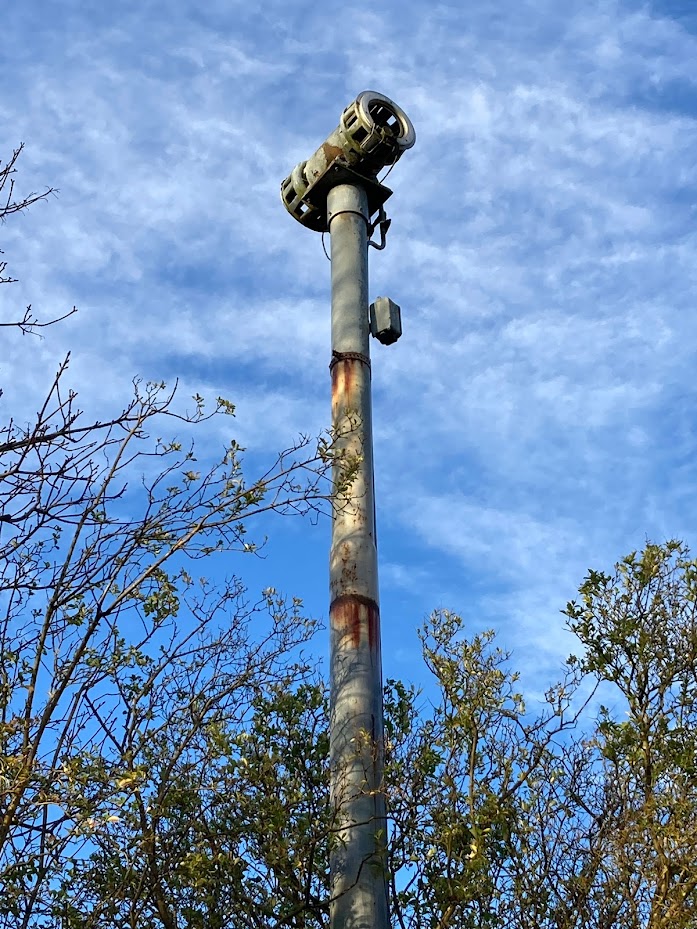 A rare example of a surving air raid siren, located on Cecil Road in Hale, has been listed at Grade II by the Department of Digital, Culture, Media and Sport on advice by Historic England.

This follows an application by local military historian George Cogswell who was evacuated from London as a child in 1944 to escape Nazi Germany’s bombs.

The pole-mounted siren was installed in 1938, as concerns grew about the threat to the civillian population from bombing campaigns. It was part of an air-raid warning system across the United Kingdom that was intended to sound a warning of imminent air attack, allowing the Air Raid Precaution (ARP) services to take up their posts and the public time to take shelter.

Following the end of the Second World War, the beginning of the Cold War saw the air raid warning system adapted to provide warning of nuclear attack, controlled by the United Kingdom Early Warning Organisation (UKEWO). One of 7,000 powered sirens across the country, the Hale air raid siren was finally decommissioned in 1993, following the end of the Cold War two years earlier. The majority were removed after the Home Office ordered them to be scrapped in 1999, but Hale’s air raid siren escaped this cull.

George Cogswell said: “The impact of the War was everywhere at that time, it was normal to play in bomb sites as children. I recall the sound of V1 rockets launched at London – the sound recordings of them even now still sends a shiver down my spine. The air raid sirens were an important part of our national response to this threat and when I discovered a rare example of this system surviving in the local area I wanted to save it, particularly as it is such a rare and highly visual landmark of the war-time Home Front.”

Roger Thomas, Listing Adviser at Historic England, said: “We are delighted that Department of Digital, Culture, Media and Sport have supported our recommendation that Hale’s air raid siren is listed. It is an extremely rare example of a surviving Second World War air raid siren and it serves as a reminder of the experience of the civilian population under aerial attack during the Second World War, and of the fear of nuclear attack during the Cold War.”

Brother of Arena bomber in court this morning