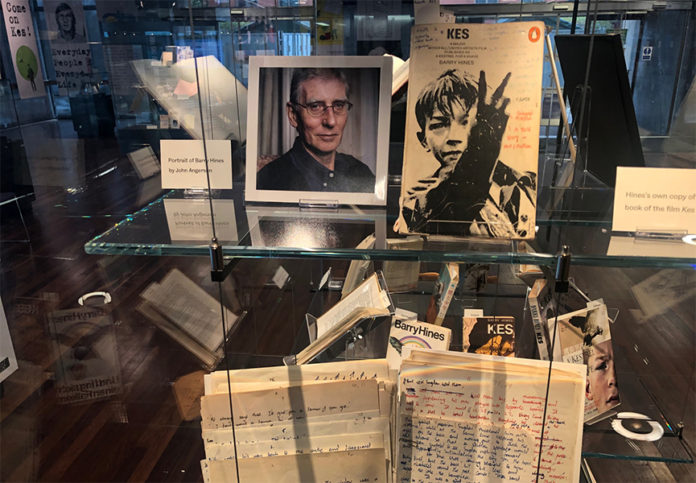 Rare documents and materials from the life and work of Barry Hines are on display to the public for the first time as part of a new exhibition at the University of Sheffield.

Free and open to everyone, the exhibition is inspired by Barry Hines’ writing and the contents of his archive that is held at the University’s Library.

Curated by artists Patrick Murphy and Anton Want, the exhibition highlights Hines’ dogged determination over three decades to write about the personal and political landscapes of working class life in South Yorkshire.

The artists worked closely with Dr Dave Forrest from the University’s School of English, whose research into the life and work of Barry Hines as well as the importance of working class writers with Professor Sue Vice has drawn widely on the archive.

Items from the archive featured in the exhibition include; the earliest draft of a Kestrel for a Knave, sections of an unpublished screenplay that is set against the backdrop of the miners’ strike, and an early draft of the novel The Gamekeeper – which Hines’ wrote on a University of Sheffield textbook while working in the University’s Arts Tower building.

The exhibition also includes materials and photographs from Hines’ early life, including photos from his days playing football for England Schools XI, his report book from Ecclesfield Grammar School, sports achievement certificates and his old school scarf that was knitted by his auntie because store-bought scarves were unaffordable.

Materials showing some of the sources of inspiration for Hines’ writing, such as George Orwell and The Little Mouse Book, are also included in the exhibition along with artwork inspired by Hines’ life and work.

The exhibition features the original script of Threads, materials from the BBC Two press pack that was used to publicise the drama in 1984 as well as an invitation to a private screening of the film that was sent to people in Sheffield who acted as extras.

A leaflet titled ‘You and the Bomb’, produced by local councils informing people in South Yorkshire of the risk of nuclear war and the possible effects it could have on the region, is also on display alongside anti-nuclear pamphlets that were circulated in the early 1980s.

Dr Dave Forrest from the University of Sheffield’s School of English said: “This exhibition is about bringing the work of Barry Hines back into the present tense. The questions his novels, films and television dramas raise are just as relevant now as they were 50 years ago.”

Anton Want added: “Barry’s work as a writer has an authenticity that people of all ages respond to, his stories are their stories. He was the genuine article and has influenced countless lives both in this region and internationally, first as a teacher and later as a writer. I’d urge people to visit the exhibition which offers a personal insight into his wonderful archives at the University’s Library along with some rare and unseen material.”

Patrick Murphy said: “This project offered the great opportunity of working with the Barry Hines Archive and creating new work in response to it. I found it very rewarding and a chance to visually explore my own working class background. Works such as A Kestrel for a Knave are timeless and universal.”

The exhibition, Untameable, is running from Monday to Friday between 9am and 7pm, and Saturdays between 12pm and 6pm, at the University of Sheffield’s Western Bank Library until 20 December 2019. Admission is free and open to the public. There is no need to book beforehand.