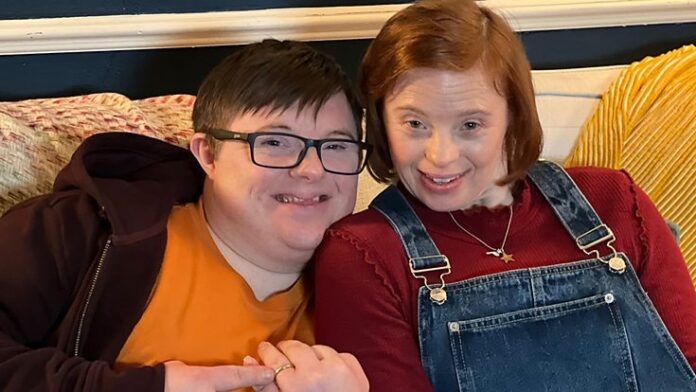 Production has commenced this week on new BBC One drama Ralph & Katie, a spin-off of The A Word which ran for three series between 2016 and 2020.

Co-produced for the BBC by ITV Studios and Keshet Productions in association with Tiger Aspect the 6×30’ episodes follow the continuing story of Ralph and Katie Wilson, with each featuring a different story focusing on the domestic challenges they face – issues faced by all newlyweds, but with an added ingredient in the mix being that the couple have Down’s Syndrome.

Leon Harrop (Ralph) and Sarah Gordy (Katie) are joined by Pooky Quesnel who reprises the role of Louise, Ralph’s mum, now Katie’s mother-in-law. Other familiar faces are Nigel Betts and Sherry Baines who play Katie’s parents Steve and Clare. There is also a welcome return for Matt Greenwood who previously delighted audiences as Tom.

This ground-breaking series is created by Peter Bowker who is also lead writer as he was on The A Word. Bowker revealed early last year the team who have since worked alongside him, all of them new and emerging disabled writers, who were chosen in partnership with BBC Writersroom. They are: Amy Trigg, Annalisa Dinnella, Genevieve Barr, Tom Wentworth and Lizzie Watson.

Peter Bowker says: “The writing team have delivered a series of scripts that are full of joy, humour and authenticity. It will be exciting to see the wonderful cast bring them to life under the Direction of the force of nature that is Jordan Hogg.”

In a drive to encourage a more inclusive future behind and in front of the camera ITV Studios and BBC Drama are teaming up with TripleC DANC on Ralph & Katie to offer behind the scenes access for those interested in how a High-End TV production is made. DANC is facilitating access and support for participants throughout the process.

The programme has been offered to people in the NW and beyond who are deaf, disabled, autistic and neurodivergent and at an early stage in their career. It begins as production commences, runs for six months and takes place remotely, with participants being given confidential access to key documents which will stretch from pre-production to the final edit of the first episode. They will also have access to meetings with various heads of departments as they discuss scripts, location scouting, scheduling, budgeting, set design, and wardrobe. Paid trainees have also been recruited in casting, ADS, Production, Costume, Unit Stills and EPK.

Bafta-winning Series Director Jordan Hogg who is himself disabled says, “We’re embarking on something that’s never been attempted in our industry, we’re changing the world “

Ralph & Katie will air on BBC One and BBC iPlayer later this year.

EE and ITV unveil latest store opening on the cobbles of Coronation Street, in...