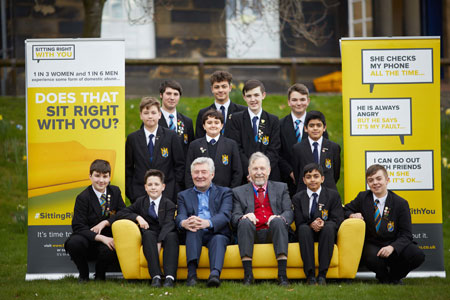 School pupils are being encouraged to get comfortable talking about domestic abuse as part of a Greater Manchester wide awareness campaign.

The Sitting Right With You campaign, run by the Greater Manchester Police and Crime Commissioner’s Office in partnership with local councils, features a yellow sofa with challenging messages to get people thinking differently about what domestic abuse is and encouraging victims to seek help.

To help young people understand what domestic abuse is and how they can seek help, a Respectful Relationships programme is being piloted with over 3000 children – aged between 5 and 18 – in 13 of Tameside’s schools. Resources are also being made available for other schools to take up the programme, which is delivered in partnership with Better Futures and led by Groundwork.

Pupils have been learning that domestic abuse it isn’t only physical violence – it can also be controlling what someone wears, their money, where they go and who they talk to. The programme, also dispels other common myths – showing domestic abuse doesn’t just affect people who drink, perpetrators are not just men and that it does affect children.

Greater Manchester Mayor and Police and Crime Commissioner Tony Lloyd said: “Tameside is leading the way by bringing our ground-breaking campaign into schools. By educating our children and young people about what domestic abuse is, talking to them about healthy relationships, and encouraging them to get comfortable talking about these difficult issues we can break the cycle of abuse.”

Tameside Council Executive Member for Children and Families Cllr Peter Robinson, who will be in attendance, said: “This is a great opportunity for pupils to share with their parents what they have been learning and to get families to feel comfortable talking about domestic abuse, which all too often is still considered a taboo subject. Living in a home where there’s domestic abuse is harmful and can have a serious impact on a child’s behaviour and wellbeing. The effects can last into adulthood, but with the right help and support, most children are able to move on from the effects of witnessing domestic abuse.”

West Hill Assistant Headteacher Paul Butterworth said: “As part of our PSHE curriculum, all pupils are taught about respect in relationships and the many forms that domestic abuse can take. The programme also ensures that all pupils know where they and their families can access support.”

A Year 10 pupil said: “Taking part in the workshop in this stage of school is important because this is the age where some people begin to form relationships.”