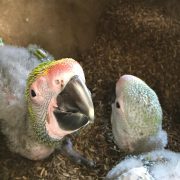 The precious pair, which hatched in April, have spent the last three months hidden away inside their nest under the diligent care of new parents, Royan and Dresden.

Keepers maintained a close eye on the new duo; carefully monitoring their development in the nest and providing plenty of nuts, seeds and fruit to help feed the chicks. The youngsters, which fledged after more than 90 days in the nest, will remain with their parents for some time while they learn all the behaviours needed for adulthood.

In the wild, the colourful birds live in the lowland forests of Central and South America, ranging from Honduras, Nicaragua, Costa Rica and Panama to Northern Colombia. There is also a tiny population in Ecuador, thought to consist of just 30 – 40 individuals. Scientists believe the global population is now estimated to be fewer than 2,500.

Greater Manchester authorities today made renewed calls on government to commit funding to the...