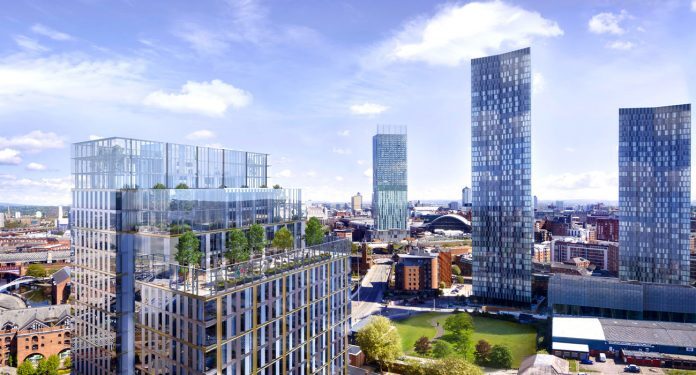 According to Avison Young’s Big Nine Q4 report, £325 million worth of investment deals were made in Manchester’s office market last year, more than any other major UK city outside of London.

Investment volumes across the Big Nine cities totalled £580 million during the final quarter of 2020, 2% up on the ten-year average, making it the busiest quarter of the year and providing a positive statement for the office market. The deals were led by two in Manchester, with Helical selling the Powerhouse Portfolio, comprising three Manchester office assets for £119 million, and Warrington Borough Council forward funding BT’s new super hub at Four New Bailey for £112 million, reflecting a yield of 4.25%.

Mark Williams, principal and managing director, regional investment at Avison Young, said: “We expect sentiment to remain subdued for the first quarter of 2021 while tough lockdown restrictions remain, but once these are eased, we anticipate continued investment activity for prime city centre offices and in some well-located out-of-town developments where there are strong levels of occupational demand. However, there is likely to be an increase in the yield gap between prime and secondary property as investors continue to favour grade A, long income and good covenants.”

As expected, the effects of Covid-19 and the subsequent lockdowns are still being felt in the market, with take up in Q2 and Q3 of 2020 particularly hard hit. However, demand for quality office space in the city centre remains high, with 800,000 sq ft of the total 1.3 million sq ft let being in prime city centre locations.

Commenting on some of these trends from the perspective of the Manchester office market, Mark Cooke, associate director at Avison Young said: “Before the national lockdown 3.0 came into place, we were beginning to see people slowly returning to their office spaces and we expect this to continue when restrictions ease again. We’re still seeing activity and interest in space at the smaller and larger end of the market, but it’s the flight to quality that is still a major factor in letting and investment decisions. Although 2020 had its challenges, in terms of lettings, the first and last quarters of the year were in line with the figures for the 10-year quarterly average, with the BT deal at Four New Bailey helping to end the year on a high.

“It has been well documented that we expect to see a permanent shift in working habits, with people looking to be more agile and split their time between home and office-based working. The office market certainly isn’t dead, but as we look ahead, we expect to see more emphasis on ’15-minute neighbourhoods’, as many want to cut back on the commute and have their workspace, as well as leisure amenities, within walking distance of their homes. We’ve already seen this from the boom in city centre living over recent years, but now it also presents a big opportunity for the suburban market, especially as the city’s recovery will put a greater emphasis on the demand for talent. Companies may want to consider where their employees are coming from in order to better facilitate a work-life balance.

“The market is still in a state of flux but as businesses focus on recovery, we expect to continue to see movement in the market but more so than ever before, it will be employees and their health and wellbeing that will be at the root of any decisions that are made.”