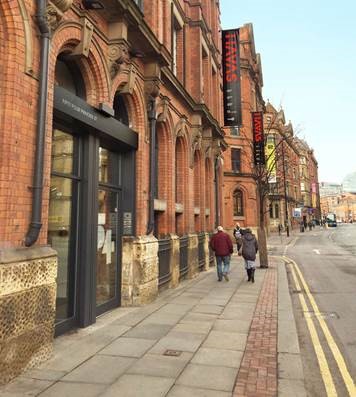 Organic, the Film & Television publicity and marketing agency, today announced it has opened a new office based in Manchester.

“Organic North” is based within the Havas Village on Princess Street in the center of Manchester.

The new office will work in tandem with the London office, servicing Organic’s existing clients as well as offering on-the-ground publicity services in Manchester and the surrounding areas.

The team will sit alongside sister agency Target Live – a full service agency for the Arts and live events – which also opened its doors in Manchester earlier this year. Organic’s business in the North will be led by Account Manager Chris Boyd, who will continue working with Organic’s existing clients, regularly travelling between Manchester and London.

Caragh Cook, Managing Director of Organic, said of today’s news: “Having a home in Manchester means we can provide a communications hub for the North, situated in the heart of an exciting, progressive city – a growing media destination which is bursting with creativity and culture. In the last few weeks, the team has been busy working on several films at Sheffield Doc Fest, kicking off an exciting new chapter for Organic.”

Robert Wilkerson, Chief Executive Officer for Target Media & Communications Group, commented: “Organic’s business and reputational growth in the last few years has been nothing short of exceptional. Our expansion into the vibrant Manchester market is the natural next step. Working with our Havas and Target Live colleagues we will offer entertainment, arts and culture clients in the North a proven and compelling new agency service with unbeatable on-the-ground know-how.”

Paul Frampton, CEO of Havas Media Group, added: “This expansion of Organic is the latest exciting development in Manchester’s Havas Village offering and we are delighted to be able to further add to our comprehensive spectrum of services.

“Havas’s rapid growth in both capabilities and talent in the region serves to strengthen our position as one of the fastest growing and most forward thinking media businesses in Manchester.”

Organic is part of Havas Media Group in the UK, after the acquisition of its parent group Target MCG in October 2016. Target MCG incorporates Target Media, Target Live, Organic and Superhero.
The Havas Village in Manchester has seen steady growth in the last 12 months, and headcount has tripled with the inclusion of recent acquisitions Target Live and Organic. In addition to media agency Havas Media, Havas Manchester now includes social media specialists Socialyse.