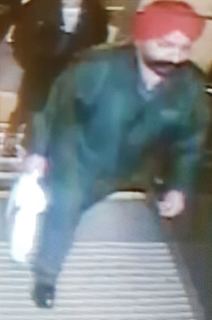 British Transport police want to speak to a man after an incident on a train travelling between Darwen and Manchester Victoria last week.

Officers believe that the man shown in the image may have information that can assist them with their investigation and would urge the man shown or any members of the public who recognise him to contact them.

He is described as a male, around 50 years old, tall, of medium build with brown eyes and long black sideburns. He is shown in the image wearing a red turban, a beige jumper and a long green coat. He was also carrying a white plastic bag.

The incident took place on the 7th March