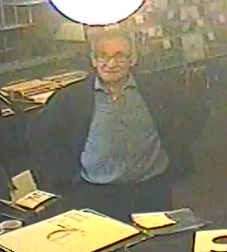 Police have released CCTV images of a man they want to speak to in connection with a series of burglaries in Manchester.

Police are investigating nine crimes, whereby a man has gone into shops and businesses in Manchester city centre, between Wednesday 17 May and Friday 16 June 2017, claiming that he is working for the water-board and needs to locate a stop-tap.

Upon being granted entry to staff areas, he has stolen cash, wallets, and purses from staff members, before making his excuses and leaving.

A bakery, a beauty salon, and a takeaway were amongst those targeted.

Detectives have launched an investigation and have released CCTV images of a man they want to speak to in connection with the burglaries.

Police Constable David Stebbings of GMP’s City of Manchester Team said: “We are investigating reports that a man has targeted nine businesses in the city centre and conned staff into letting him into the staff area. He has then abused this trust and stolen from staff.

“We have released photos of a man we want to speak to in connection with the burglaries, so if you recognise him I would urge you to get in touch as a matter of urgency.”