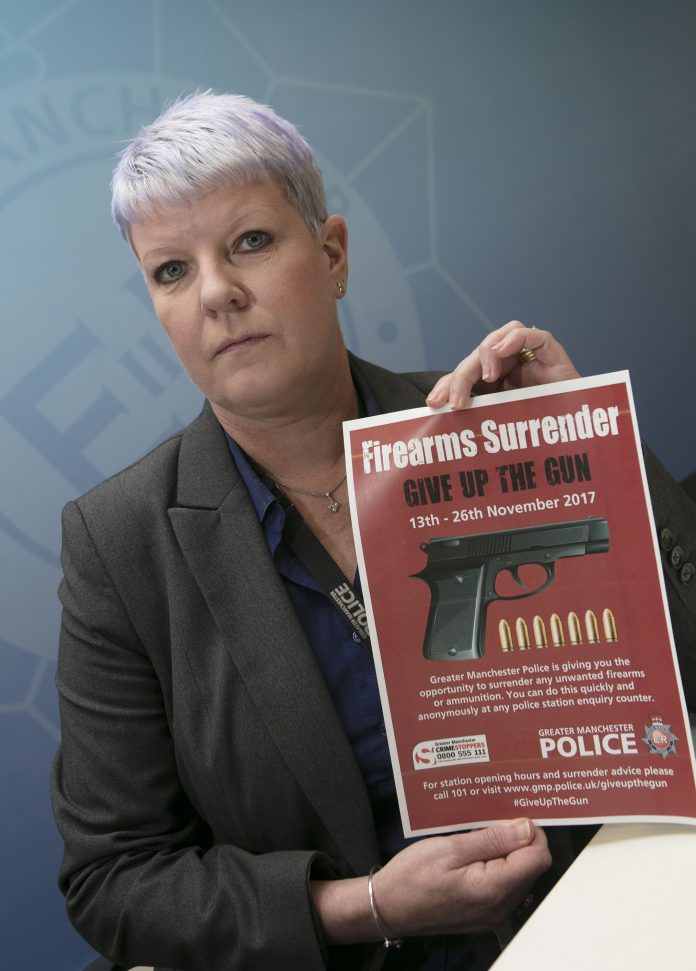 The father and friends of Halton McCollin who was shot dead in Stretford in 2008 are urging people to ‘Give up the Gun’ as Greater Manchester Police launches a firearms surrender.

Halton, who would have turned 30 yesterday, tragically lost his life when he was shot in the back of his head outside the China Garden takeaway on 19 January 2008. His murderer has never been caught.

Halton’s father, Halton McCollin Snr, and close friends Umer and David are calling on people to surrender their firearms in the hope it will stop anyone else going through the same pain.

During the next two weeks (13th November – 26th November 2017) people can hand in their firearms and ammunition at any police station enquiry counter anonymously with no questions asked.

The last firearms surrender in Greater Manchester took place in April 2016 and 221 weapons were handed in.

Although firearm crime continues to decrease, the surrender offers people the opportunity to safely surrender illegal firearms, a number of which may be held by people in innocence or ignorance of their illegality.

Detective Chief Superintendent Mary Doyle said: “Halton’s family and friends should be celebrating his 30th birthday but instead they are visiting his grave and left wondering what kind of man he might have turned out to be.

“Too many lives have been torn apart by gun crime and it is no exaggeration to say every weapon retrieved via the surrender has the potential to save a life.

“The surrender offers you an opportunity to dispose of your weapon safely and discreetly whether it is a gun that has been handed down through the family or a firearm in your loft collecting dust.

“You won’t have to give your name or address, we just want more guns out of harm’s way. Please do the right thing for the sake of all the families that have had their lives destroyed by firearms.”

Beverley Hughes, Deputy Mayor for Policing and Crime, said: “There are still too many gun related incidents occurring across Greater Manchester, with 28 since April. The Give Up The Gun campaign will help stop that number from increasing any further, offering a safe place for guns to be handed in, no questions asked.

“Last year’s campaign was hugely successful, with 221 guns taken off the streets, but I want to do even better this year and urge anybody with a gun to do your part and hand it in to a station – it may help save a life.”

Greater Manchester is calling for a ban on flammable cladding systems and an overhaul...