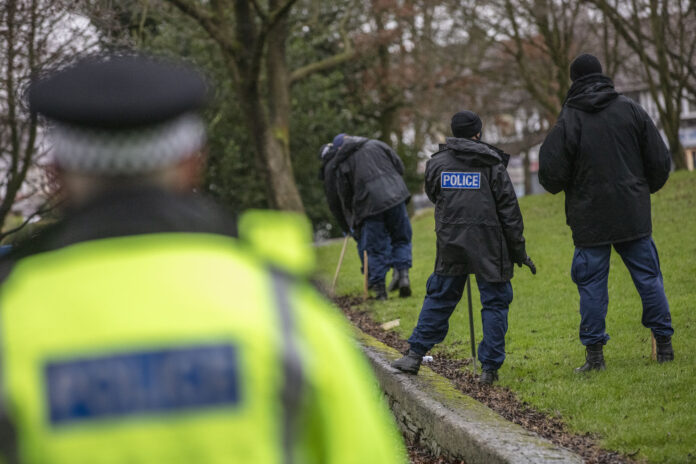 Officers tackling serious and organised crime in North Manchester have launched a dedicated multi-agency disruption hub in the district to crackdown on criminal activity in the area.

As part of the Haemus hub, a team totalling 17 officers has been formed, consisting of experienced detectives, dedicated safeguarding officers, intelligence officers, and a team of proactive officers who are dedicated to the area in both plain and uniformed patrols.

The team will engage in a range of proactive activities to continue to reduce the prevalence of organised crime in the north of Manchester.

Today a team of officers from the Op Haemus team were joined by GMPs Tactical Aid Unit & Tactical Dog Unit in performing an intelligence-led weapon sweep of the area of Mandley Park – on the Salford border.

Any discarded or hidden weapons, firearms or ammunition found in the area during the sweep will be recovered and examined potentially as evidence as part of the 12 ongoing investigations within Op Haemus.

In the first six weeks since the inception of the disruption hub, Op Haemus officers have made a total of 25 arrests, conducted 122 stop searches and have searched 15 houses.

During the same short period, the hub has already seized two viable firearms, large quantities of class A and class B drugs, and seized 13 vehicles.

In conjunction with Manchester City Council, the hub works closely with housing providers, social services, adult services and a number of other agencies in a multi-agency approach to tackle organised crime in North Manchester.

This includes working closely with partners in local authority to provide a range of safeguarding measures and care packages to protect and support vulnerable adults and children at risk of being targeted, coerced and victimised by criminal activity.

Superintendent Rebecca Boyce, of GMP’s North Manchester division, said: “The launch of the disruption hub as part of Operation Haemus is a very welcome introduction for the people of North Manchester, as it’s the latest in a series of proactive measures we’ve employed in recent months to tackle the blight of serious and organised crime in our community.

“It is important that we maximise the resources we have available to us, and we have ensured that we have a dedicated and skilful team working around the clock to disrupt the activity of criminal groups, while protecting the public that we serve.

“We have always been honest and open about the challenges that have presented themselves due to the complexities and developments during this operation, but we are confident that we are making a tangible difference on our streets which can be seen by the recent decrease in firearms activity.

“While disputes between local crime groups generally pose little wider risk to the general public, it is understandable that such incidents cause unease and distress in our communities and we hope that the innocent, honest, and decent people we serve feel reassured by this targeted and increased action we are taking in the district.

“As ever, we continue to urge members of the public to contact police with any information or concerns, knowing that it will be treated with the strictest confidence – we have high-visibility patrols that can be approached, or a dedicated phone number that can be contacted – and Crimestoppers is always available for those who wish to pass on information anonymously.”