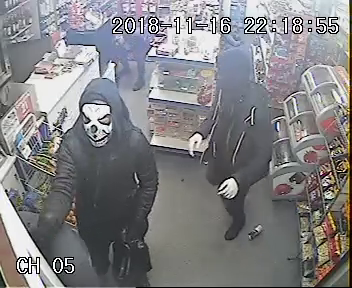 Police have released CCTV images after a shop worker was stabbed and assaulted during an armed robbery in Longsight last Friday.

Shortly after 9.15pm on  four offenders entered the One Stop off licence on Berigan Close,  wearing masks and gloves.

A shop worker was repeatedly assaulted with a metal bar and a knife was held to his throat before he was stabbed in the leg.

The offenders left with a quantity of cash, cigarettes, alcohol and the shop worker’s mobile phone.

Detective Constable Stuart Macquiban of GMP’s City of Manchester Division said: “This was a terrifying attack on an innocent shopkeeper.

“Thankfully, he is recovering well from his injuries, but the psychological impact of crimes like this can be substantial.

“We have released CCTV from the store in the hope that someone can identify the people pictured.

“If you have any information, please contact police immediately.”

Women has ring stolen which had her son’s ashes in at knifepoint in...