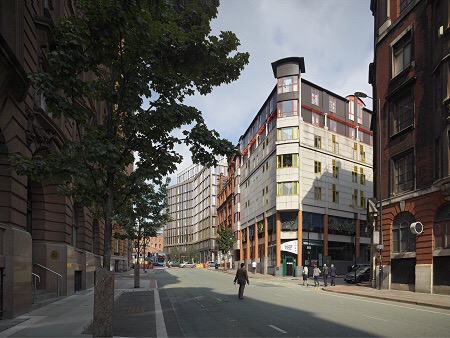 A planning application for the reworked scheme to regenerate the site on the corner of Princess Street and Whitworth Street has been submitted to Manchester City Council.

Urban&Civic purchased the one-acre site with an extant planning consent in December last year. Since the existing planning consent was granted in 2007 a number of factors have changed including the economy and property market as well as thinking about design and uses, so Urban&Civic has worked on a revised scheme that better reflects the current market and its aspirations for the site.

The new scheme was presented at a public exhibition on 11/12 September 2015 and the majority of people that commented on the proposals supported the regeneration of the site and preferred the new scheme to its predecessor.

Andrew Lavin, Development Manager for Urban&Civic said: “This is an exciting new mixed-used development that will transform a key city centre site that has stood derelict for over a decade.

“Our vision is to create a vibrant development that sensitively reconnects the site to the surrounding area. We believe the introduction of local independent traders in the ground floor units will help integrate the scheme into the neighbourhood. We plan to retain ownership and long-term stewardship to help ensure the development fulfils its potential.”

The revised design, which broadly reflects the height and massing of the consented scheme, creates a contemporary reinterpretation of key architectural characteristics of historic buildings within the Conservation Area and sensitively reconnects the site to its surroundings.

Subject to planning permission being granted, work would start on the initial phase of residential buildings in summer 2016, with the first new residents moving in 20 months later.