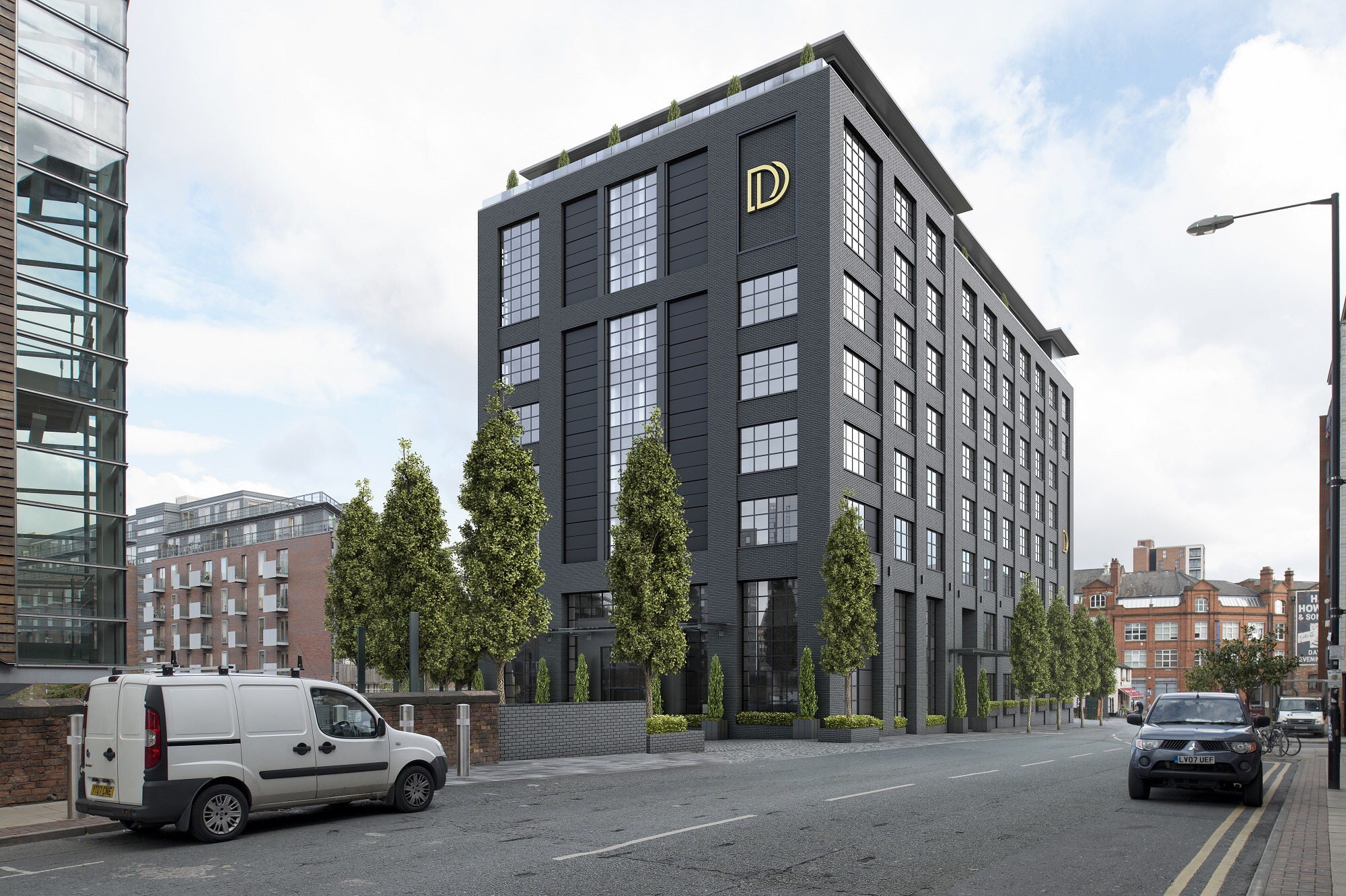 Leeds based Evans Property Group has acquired a prime site on Ducie Street within Town Centre Securities’ (TCS) award winning Piccadilly Basin regeneration development in Manchester City Centre to deliver a 137 bedroom Dakota Deluxe hotel.
The deal forms part of Evans’ strategic plans to bring its luxury Dakota brand hotels to all key UK regional cities in the next five years. The Manchester venue follows on from Dakota’s other hotels, the most recent opening being the Glasgow City Centre Dakota Deluxe in April this year, which complements the pre-existing hotels at Eurocentral on the outskirts of Glasgow and South Queensferry, Edinburgh. The Leeds City Centre Dakota Deluxe is nearing completion and will open in April 2017, as part of Evans’ £25 million pound regeneration of the Bond Court area of the city.

The 0.6 acre Manchester site has been acquired from TCS, the regeneration experts behind the £300m landmark Piccadilly Basin, an award winning 14 acre waterside mixed-use scheme situated in the heart of Piccadilly, within the core of the city and adjacent to Manchester Piccadilly train station.
Evans has submitted a planning application to Manchester City Council for the design-led hotel and subject to approval, work could begin on site next year with a view to the hotel opening in 2019. Proposals include plans to create high quality public realm and comprehensive landscaping with improved linkages to the Rochdale Canal.

The hotel would be the next development site to be brought forward at Piccadilly Basin along with recent plans to convert Brownsfield mill into luxury apartments and the commencement on site of Burlington House, a 91 apartment scheme designed by Simpson Haugh Architects.
Alan Syers, Portfolio Director at Evans Property Group, said;

“We are delighted that our close relationship with TCS has enabled us to secure such a key site to support our expansion plans for Dakota Hotels. Piccadilly Basin is an impressive and established development in a strategically important and bustling area of Manchester, ideally situated adjacent to one of the UK’s busiest train stations and proposed future terminal of the HS2.

“Manchester is one of the strongest leisure and business destinations in the North of England and one of the most successful in the UK outside of London, so we are confident we have found the perfect site. The Leeds hotel is close to delivery and we are now actively seeking suitable sites or buildings in target cities including Birmingham, Bristol, Cambridge and Oxford for additional Dakota hotels of circa 70,000 sq ft with around 100 bedrooms.”

Richard Lewis, Property Director at Town Centre Securities said: “Piccadilly Basin has been an important regeneration project for TCS for many years and continues to flourish as the key components complement one another. The land sale to Evans is reflective of our special and valued relationship with them and the development of a Dakota luxury hotel will be a superb addition to the mixed use offering at Piccadilly Basin.”

Dakota is a lifestyle brand, synonymous with timeless style and exceptional service. Dakota’s founder is the internationally acclaimed Ken McCulloch, recognised as one of the UK’s most influential hoteliers. McCulloch was the mastermind behind the Malmaison hotel brand which instantly became the most significant European hotel brand launch in a generation.

Bet Fred founder gets go ahead for Salford scheme