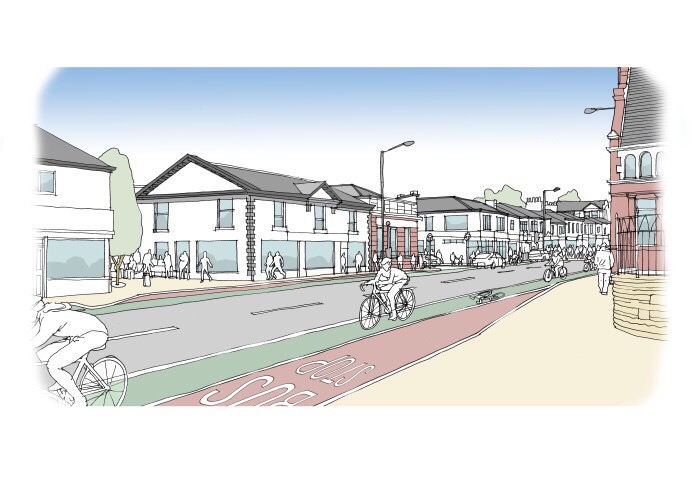 A £2 million plan to regenerate Prestwich village for shoppers, businesses, pedestrians and residents will be presented to Bury Council leaders next Wednesday (2 March).

It follows a huge public consultation exercise during which 615 responses were received, with 504 comments on various aspects of the proposals.

The cabinet is being asked to agree Option 1 of the original proposals, but with several important changes which were suggested by the public consultation.
The aim is to give Prestwich a lively high street, full of independent retailers, with a much improved environment and measures to tackle congestion.
The regeneration scheme includes: single lane traffic with wider pavements, permanent parking bays, new bus lay-bys, bus stop relocation, new cycle lanes and improved public realm.
The council is providing £1.5 million of the improvement money, with a further £500,000 coming from Transport for Greater Manchester.
Councillor Mike Connolly, leader of Bury Council, said: “We’ve worked long and hard with our partners and people in the community to put together these plans, to create a much better environment for shoppers, pedestrians and residents while still trying to keep the traffic moving in a highly congested area.

“The area around Bury New Road plays such an important part in the life of the village which is why, even in these cash-strapped times, we are committed to regenerating Prestwich.”

Following the public consultation, several changes have been made to the proposals:

Clifton Road will remain open in both directions. This will be monitored for 12 months from the scheme’s completion to assess the effect on traffic flows, congestion and safety.

The number of on-street parking spaces will be reduced as will the length of the parking bays. This will enable more street trees to be planted, improving the appearance of the area. Parking will be restricted to 60 minutes with no return with one hour.

The council will work with Transport for Greater Manchester to ensure that the traffic lights are sequenced to maintain traffic flow and plans  to have a northbound bus lane have been scrapped.

If the scheme is approved, work should start in October 2016.
The council has set up a dedicated webpage which will be updated with new information to keep residents informed as the scheme progresses: www.bury.gov.uk/prestwichhighst

Councillor Jane Black, chair of Prestwich Township Forum and Regeneration Group, said: “I am delighted that so many people living and working in Prestwich took part in the consultation exercise, which took place over three months, and shows how important these proposals are. We all want Prestwich village to be regenerated for the benefit of residents, businesses and commuters, and we have listened carefully to all views put forward, which have helped shape the final scheme.
“There will be further scope for businesses and the community to get involved in this project, including sponsorship of trees and other landscaping elements.”