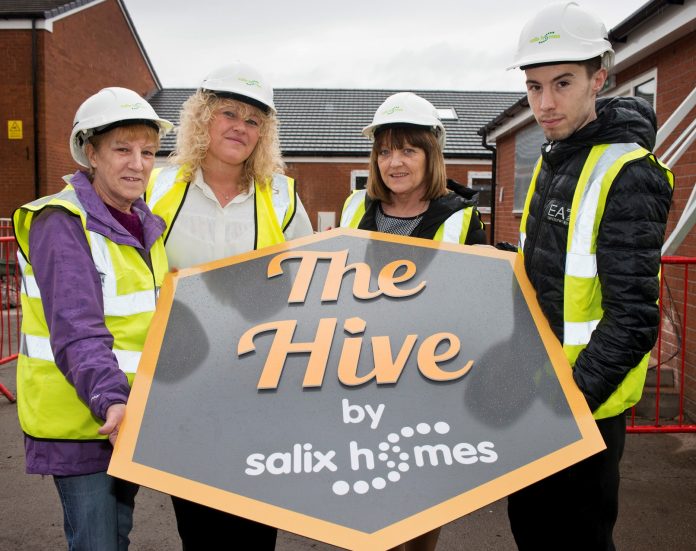 A ground-breaking development to provide affordable homes for young people in Salford is in the running for another national award.

Last year, housing provider Salix Homes launched its flagship development The Hive – one of the first centres of its kind in the region to provide much-needed accommodation exclusively for people aged 18 – 25.

The centre, which was opened by Greater Manchester Mayor Andy Burnham, was named in memory of the late Kersal Councillor Harry Davies, who was well-known in the community for his commitment to helping others and his passion for beekeeping.

Now the facility on Cromwell Road in Kersal has been named as a finalist in the Innovation of the Year category of the UK Housing Awards 2018.

It’s the second national accolade for the development after it was crowned Highly Commended in the 24 Housing Awards last year.

Lee Sugden, chief executive at Salix Homes, which owns more than 8,300 homes in Salford, said: “The Hive is ground-breaking in its nature, providing not only modern and affordable accommodation for young people, but also an opportunity for them to get a head start in life and build themselves a bright future.

“We are very honoured that the legacy of Cllr Harry Davies can live on through The Hive. He was passionate about helping others – the same aspirations The Hive has –  and we are sure he would be as proud as we are to know it’s in the running for another prestigious award.”

The Hive provides accommodation for up to 14 young people while they work, complete their education or training.

The project focuses on providing affordable accommodation for young people whose ability to work or study is being hampered by their unsuitable living arrangements – it may be that they are sofa surfing or don’t have a permanent place to live.

Speaking at the launch last May, Greater Manchester Mayor Andy Burnham said: “This is a development that’s very much focussed on young people and housing that’s affordable to them. I’m very proud to support it, and I would like to see more of this type of development all across Greater Manchester.”

Salix Homes worked alongside contractor Seddon to totally transform and modernise the building, which was once the site of Petrie Court homeless shelter, but had stood empty since closing down in 2014.

The winners will be announced at an awards ceremony in London in May.