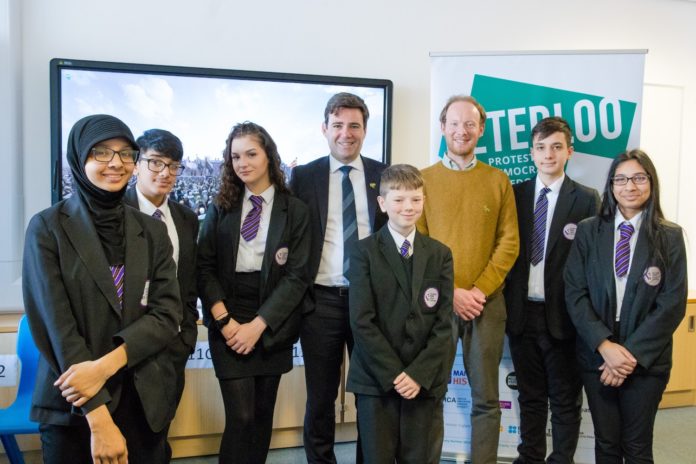 When the Peterloo Massacre took place in Manchester on 16 August 1819, such were the scars of the events that would see a peaceful protest lead to bloodshed, that the impact is felt 200 years later and yet awareness levels have remained low. One of the lead areas of activity for Peterloo 2019, which is led by Manchester Histories, is to ensure that young people have the opportunity to connect with, explore and understand the legacy of Peterloo and its significance to them and their lives today. It aims to foster in young people a greater understanding and connectivity to politics, and their role as active citizens.

Mayor of Greater Manchester, Andy Burnham, visited Falinge Park High School in Rochdale to officially launch the Peterloo 2019 Learning Programme, taking part in an interactive session with students, based on the Peterloo Massacre. The students and school have played a role in the creation of the resources that will accompany the learning programme.

Speaking at the launch The Mayor of Greater Manchester, Andy Burnham, said: “It doesn’t matter who you are, if you’ve got the right ideas you can make change happen. If you look at Greater Manchester’s history of the TUC movement, votes for women, the co-operative movement, you can take inspiration from what can be achieved and in many ways Peterloo is the starting point of this.

“Our history is integral to shaping our future, and it’s important that we learn from our past to build on the values and principles of today. Peterloo was a significant date in Greater Manchester’s history and through this learning programme young people will explore the legacy of that day and the importance of free speech and democracy – values we often take for granted today.”

Janice Allen, Head of Falinge Park High School, said, “ Working with young people is full of optimism and hope for the future. We say to them, that for them to build the future, it is important that they learn from events in the past – locally, nationally and globally – as it is this learning which helps them to understand the present. By this I mean who they are, their unique identities, their communities and where they fit into society. The Peterloo Massacre is a key event which pupils should learn from. In identifying what took place and how this shaped our present they can use this to make the future a better place.”

Andreea-Elisa Carmaz, a student at Falinge Park High School, said, “Peterloo represents a brave step towards democracy. I consider it one of the most important moments in history – certainly for Rochdale and Greater Manchester. A courageous sacrifice which has changed our future. Who knows what harsh conditions we could be facing. We should be forever thankful for the people inspired by the Peterloo incident.”

Danyal Mohammad, a student at Falinge Park High School, said, “It is important to remember what happened in 1819, without the event England could be very different. We should remember the people who died that day as their deaths have not been in vain. We now have the right to vote, our voice is heard and considered by the government. This is why we should remember the Peterloo massacre – the lasting impact.”

The Peterloo 2019 Learning Programme has been created by Manchester Histories in partnership with People’s History Museum. The learning resources include lesson plans looking at everything from what took place at Peterloo and its aftermath to the role of citizenship today, activities to take part in, assembly presentations and more. These have been co-designed with The Politics Project, which specialises in supporting young people to use their voice by providing them with democratic education. The animated film that accompanies the resources has been created by the young people of youth leadership organisation RECLAIM facilitated by artists Triple Dot Makers.

The Peterloo 2019 Learning Programme has been made possible with the support of Historic England and UK Parliament Education and Engagement Service.

Michael Powell, Learning Co-ordinator Peterloo 2019 & Programme Officer at People’s History Museum, said, “We have worked with historians, teachers and students to develop rich resources that will help young people to identify with Peterloo, not just looking through a historical lens, but very much from a contemporary perspective as we explore themes such as freedom of speech, democracy and protest. We’ve also done this by working with young people to produce the resources, which include an animated film in which young people oversaw the storyboarding, directing and creative treatment.”

Popular sportswear brand Under Armour is setting up shop this month in leading ...

Manchester will once again celebrate International Women’s Day in style with a free ‘Walk...