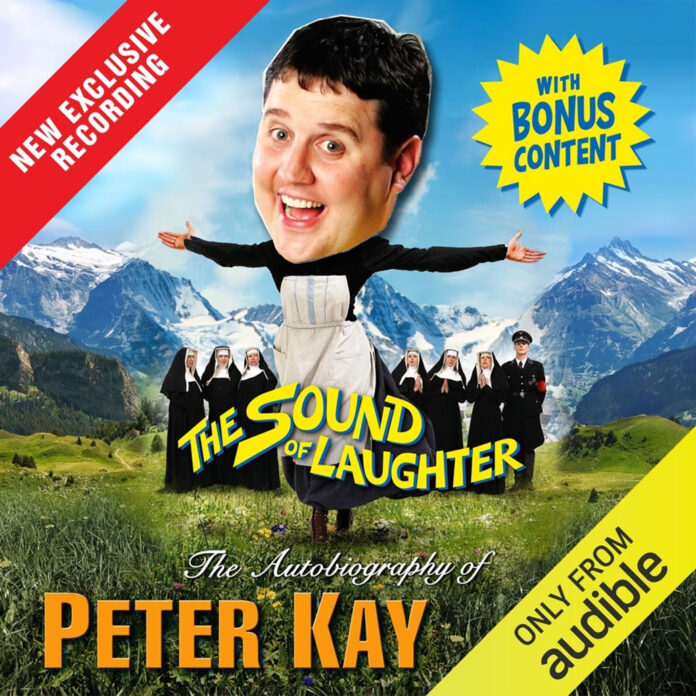 Grab a brew and some good-for-dipping biscuits and listen to Peter take a trip down memory lane, including his first-ever driving lesson, his Bolton childhood, the numerous jobs he held, right up until he found fame in the world of comedy.

The Sound of Laughter observes the absurdities and eccentricities of family life; elderly relatives, garlic bread, cheesecake, weddings, funerals and your mum’s HRT… hear all about it from Peter, read live and direct from his own front room.

Peter Kay remains one of Bolton’s funniest comedians. His first autobiography The Sound Of Laughter still holds the record for the biggest selling British hardback autobiography of all time. Selling over two million copies worldwide.

Peter has won numerous BAFTA’s, National Television Awards for his TV work including Car Share and Phoenix Nights. As well as three number one chart singles, Peter also holds the Guinness World Record for the biggest selling stand-up comedian on the planet.

So, you’ve finally recorded your first bestselling autobiography after fifteen years, how did that come about?

I blame the pandemic. Mind you people are still blaming the pandemic for everything. You know I still can’t get Porridge at McDonald’s because of the pandemic. What’s all that about? It’s oats in a microwave! Or fish fingers with a Happy Meal.

The truth is Audible approached me during the pandemic to ask if I’d like to record my first book, The Sound Of Laughter, in an effort to try and cheer people up a bit. So hopefully it’ll lift people’s spirits. We all need a laugh. Especially without McDonald’s doing porridge.

Had you never thought of recording it when it was released

I recorded the first chapter and brought it out for charity but never got round to recording the rest of the book. I suppose life just got in the way.

You recorded it at home

Audible said it was fine, so that made everything much more relaxed. I could record at my own pace and that made the whole experience much more fun as I was able to drift off the subject matter and have a different view about it all these years later. I’d never read the book since I wrote it in 2006.  It was fascinating, like reading something that somebody else had written. Although weirdly, even though I knew what was coming next, I’d forgotten so much of what I’d written.

I believe you never intended to write your autobiography

I didn’t, that was the last thing I wanted, but I found out that a book was already being written about me. I wasn’t happy so decided to write my own. If anybody was going to write about me, I thought I’d probably be the best person to do it.

You were right. Not only did The Sound Of Laughter go on be the biggest selling book of the year. It was also stayed in the number one in the book chart for a remarkable ten weeks and still holds the record as the biggest selling British autobiography of all time

Only in hardback, apparently.

It is overwhelming. As I felt completely out of my depth when I wrote it. I didn’t start writing until March 2006 and it had to be completed by the June. I remember sitting in my kitchen every day, blue skies outside and there I was typing away. I spent the first few weeks constantly clicking on the thesaurus, looking for better words. I was so self -conscious, I didn’t even have my English GCSE but then slowly I began to find my own voice, and everything began falling into place. It turned out I really enjoyed writing the book. I just wanted to make it as funny as possible. Something that people could chuckle at on the beach or on their journey to work.

The cover was quite iconic

It certainly stood out. I knew the rival book would have an image of me on the cover so I needed something that would set it apart visually

When I was younger me and my friends would always send birthday cards to each other with heads cut out of magazines stuck on from other people’s bodies. That’s how The Sound Of Music parody came about with my head stuck on Julie Andrews. It also tied perfectly with the book, as I was taught by nuns, and they run through the book constantly. Fast little nuns.

It was important that people would laugh instantly when they saw the book. I even used the same head again on the cover of my second book, Saturday Night Peter.

That was also a bestseller in 2009. You clearly have a flair for writing. How come you’ve never written anything since?

Did recording the book make you miss writing?

It really did. Within the first few chapters of recording, I was inspired to start to write a third book. I had the idea about ten years ago. All about working in TV. From when I started doing bit parts in Coronation Street right up to Car Share. It’s been a real joy recalling the memories. There’s over twenty years of stories about filming series like Phoenix Nights and Max & Paddy’s Road To Nowhere. Appearing on chat shows like Parkinson, at the Queens Golden Jubilee and sharing letters from Ronnie Barker. We wrote to each other for years as pen-pals until he passed away.

Wow! That’s quite a scoop. So, you’ve been busy working away

I have and I’m very proud of it. I’ll no doubt be recording that book too before you know it.  I just hope people enjoy it as much as this first one.

Peter Kay’s The Sound of Laughter is available to download from Thurs 16th September (for Audible members, or for free as part of a 30 day trial) here.

The Wipers Times Cast Enjoy A Piece Of Manchester History