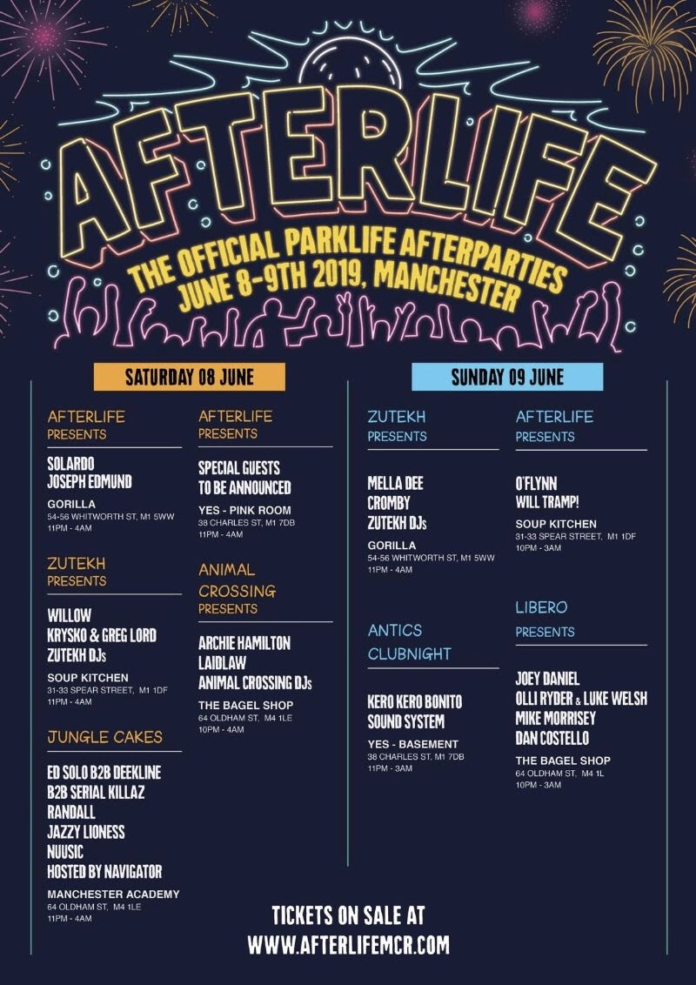 With less than three weeks left until things kick off, Parklife festival has dropped the wide-ranging line-ups for the official after party series Afterlife, with tickets available from Friday 24th May at 9am.

Taking places across five city centre venues on 8th and 9th June, Afterlife will join forces with a number of local, independent promoters to host four parties per evening with a varied selection of artists from the festival programme.

In the midst of an Ibiza residency alongside Camelphat and Fisher, local favourites Solardo will perform at Gorilla, a two-storey club in the heart of the bustling student quarter, on Saturday night for Afterlife Presents. The following night, the same promoters will head over to the Northern Quarter to host London selector O’Flynn and Homoelectric resident Will Tramp! to Soup Kitchen – everyone’s favourite basement club.

Zutekh, another instantly recognisable Manchester party brand, bring the Manchester-born Willow to Soup Kitchen on Saturday, alongside Warehouse Project residents Krysko and Greg Lord. The next night sees them head to Gorilla with Liverpudlian DJ and producer Mella Dee, Belfast’s Cromby and the resident Zutekh DJs.

If this wasn’t enough, Saturday also sees drum & bass and jungle crew Jungle Cakes locked in for a takeover of Manchester Academy which features a solid B2B2B with Ed Solo, Deekline and Randall, plus a range of others in tow. Hip Oldham Street venue The Bagel Shop are also in on the action, hosting an Animal Crossing party on Saturday with Archie Hamilton and Laidlaw alongside the Animal Crossing DJs. Libero bring Joey Daniel, Olli Ryder & Luke Welsh, Mike Morrisey and Dan Costello to the club on Sunday.

With things kicking off in just over a fortnight, all tickets for the Parklife day programme are already completely sold out. The biggest edition to date, headliners include Cardi B, George Ezra, Solange, The Streets, Christine and the Queens and Migos. Also confirmed to perform across the weekend are Disclosure, Eric Prydz, Nas, Chase & Status, Mark Ronson, Major Lazer, DJ Khalid and Mura Masa.

Get your hands on free goodies at the Trafford Centre as they herald the...