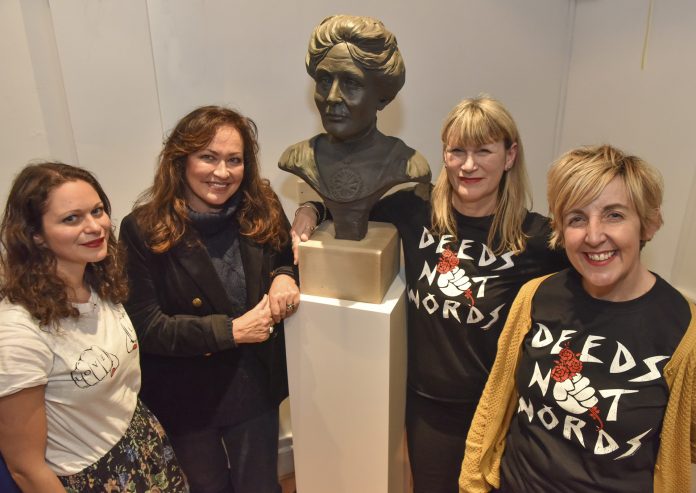 The Pankhurst Trust kick started a monumental year of celebration last night (22 January) with the ultimate ‘house party’ to mark 100 years since the first women gained the right to vote.

Guests for the sold out event gathered at 62 Nelson Street, the former home of Emmeline Pankhurst and her family, and the place where the Suffragette movement took flight, now known as The Pankhurst Centre.

The Pankhurst Trust teamed up with Girl Gang Manchester and Everything’s Sweet Threads to organise the event, which featured art, fashion, live music, themed nibbles from plant-based caterers The Mindful Kitchen and even a newly created Suffragette Cocktail! The evening was hosted by actor and social activist Julie Hesmondhalgh, who is a great supporter of the Trust.

Speaking to the guests about the occasion and the Trust’s future plans Julie Hesmondhalgh said, “I am proud to be here tonight celebrating the wonderful Pankhurst Centre, which is a huge part of Manchester and Britain’s social history. 2018 is Year of the Woman and our chance to make a difference. We want to put the Pankhurst Centre on the map turning it into an internationally recognised museum marking the achievements of all those who have fought for equality.”

The evening’s central event was the unveiling of a bust of Emmeline Pankhurst created by Jane Robbins for the garden of the Pankhurst Centre. Jane, a portrait and figurative sculptor, undertook the work to support the Pankhurst Trust and to mark the 2018 centenary. Her work will now stand in the Suffragette Garden that will be planted at Emmeline’s former home as a horticultural monument to Manchester’s radical daughters thanks to the support of hundreds of people who backed the Pankhurst Trust’s crowdfunding campaign.

A limited edition T-shirt by Manchester designers Everything’s Sweet Threads was also revealed for the first time. The label is known for its ultra hip line of ‘solitaritees’ has brought its own brand of politically inspired cool to mark the centenary year with a specially designed Deeds Not Words design. Everything’s Sweet Threads’ commitment to the Pankhurst Trust means that the charity will receive 10% of the sale of each T-shirt across its range.

Gail Heath, Chief Executive of the Pankhurst Trust, says “One of the most special aspects of the 2018 centenary, is the amazing support that we’re receiving and the opportunity it is giving us to work with wonderfully talented and creative people such as Jane Robbins and Al and Gerry from Everything’s Sweet Threads. It was fantastic to partner with Girl Gang Manchester for our launch event which was a fitting start to a year that will mark the achievements and stories of women of the past and present, as well as looking to the future, as we continue to play our role in the quest for female equality. We were delighted to be joined by Julie Hesmondhalgh, whose support for the Pankhurst Trust means so much to us and who’s words lit up the evening.”