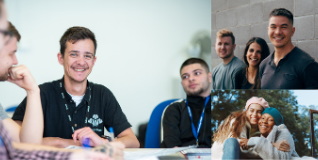 According to the research, with 2,000 16 to 25 year-olds across the UK, more than a third of young people claim to have abandoned their aspirations for the year ahead, with this increasing significantly among those young people surveyed who are not in education, employment or training (NEETs).

The research, carried out by Censuswide, also shows how 41 per cent of young people believe their future goals now seem “impossible to achieve”, with this rising to half of those surveyed from poorer backgrounds.

More than a third of young people feel they will “never succeed in life”, and this increases to almost half of those surveyed from poorer homes.

Over a third  of young people surveyed say they have “lost hope” for the future.

Jonathan Townsend, UK Chief Executive of The Prince’s Trust says: “Today’s findings show that the pandemic has done more than disrupt vital education, training and job opportunities for young people. It has eroded their confidence in their future, to a point where some feel they won’t ever be able to succeed in life. We have an aspiration gap, with young people losing hope for the future and, sadly, those from disadvantaged backgrounds being hardest hit.

“It is truly a responsibility for all of us to ensure the odds don’t stay stacked against these young people. We must support them to upskill, retrain and access job opportunities, or else we risk losing their ambition and potential to long-term unemployment – to the detriment of their future and to the recovery of our economy.”

According to the research, more than half of young people (55 per cent) say the coronavirus crisis has made them fearful for their future, while 46 per cent say thinking about their future makes them feel “hopeless”.

More than half (58 per cent) of young people are “scared” of being unemployed, while almost half (48%) of NEETs surveyed are worried they will “never get a job”.

The report released today comes as the youth charity marks the support of its millionth young person, at a time when a deepening jobs crisis is hitting young people the hardest.

Jonathan Townsend continues: “As The Prince’s Trust marks this significant milestone of supporting a million young people, we face very difficult times for a generation just starting their working lives.

“More than half a million young people are already unemployed, and as they miss out on vital education, training and job opportunities, millions more are at risk of being left behind. Young people need us now more than ever, and we know from experience that even the smallest interventions can be a turning point towards a more positive future. Government, employers and charities must work together and act now to prevent a lost generation.”

The Prince’s Trust helped more than 70,000 young people last year to build the confidence and skills they need to realise their potential. The employability and enterprise courses offered by The Trust, which are run both in person and online, give young people the practical and financial support needed to stabilise their lives. Three in four young people on Prince’s Trust programmes move into work, education or training.

MMU to close its Cheshire campus

Coronavirus Latest -315 deaths and trace and test pilot scheme to begin on the...