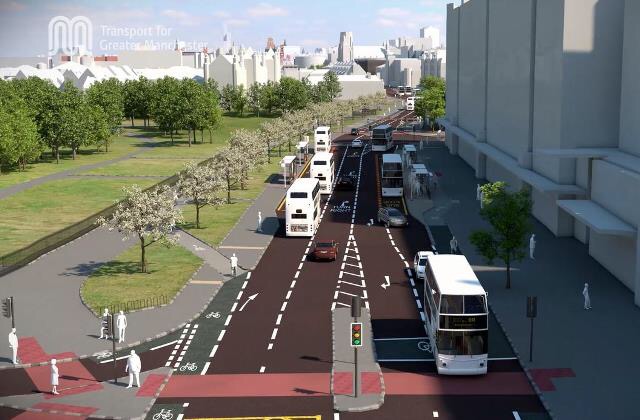 Bus passengers, cyclists and pedestrians will start seeing a new-look Oxford Road when roadworks finish and the first stage of a permanent change comes into effect.Engineers working on Transport for Greater Manchester’s bus priority project are due to lay a new surface, kerb to kerb, between Hathersage Road and Denmark Road in a three-day operation starting on 6 June.

The work is part of a £122 million programme to deliver faster bus journeys to, from and through the city centre with more punctual and reliable services.

The Oxford Road scheme, started in 2014, will ultimately see a bus and cycle-only corridor created between Hathersage Road and Grosvenor Street, to be introduced in phases as the work progresses.

This investment is itself part of the wider Grow package of investment – a £1 billion package of city centre infrastructure improvements by 2017, including the Metrolink Second City Crossing, bus priority measures, six new and better cycle routes into the city centre and major rail improvements.

The new-style bike lanes, safely separate cyclists from buses. At bus stops, instead of overtaking a bus, the rider can cycle ‘behind’ the stop, making easier and safer for more people to ride along the popular route.

The new coloured cycleway featuring pedestrian crossing points, including a zebra style crossing, informs riders, pedestrians and bus passengers of the layout so they are also able to watch out for each other. Greater Manchester’s first lane like this was built opposite Whitworth Park last year as a trial and has been in use since.

For pedestrians the result will be a much improved, boulevard-style space for them to enjoy with wider footways and quieter roads. More than 140 new trees are being planted, including exotic species not usually found on British streets such as Japanese cherries, sweet gum trees and gingko.

The resurfacing works, which requires that part of the road be closed to all traffic, have been timed with an existing road closure and to bookend the installation of new segregated cycle lanes.

Bus route diversions in place already are unchanged and details can be found on affected bus stops and on the TfGM website here.

Once the roadworks are completed on 9 June general traffic heading into the city on Oxford Road will be unable to travel past this point between 6am and 9pm and will instead be permanently rerouted, turning right on to Hathersage Road.

Councillor Andrew Fender, Chair of the TfGM Committee, said: “This work will completely transform Oxford Road, making it a much more pleasant space for everyone.

“While these improvements to the public space are long-lasting and to be welcomed, the real purpose of what we are doing is to support the economy and the community by improving connections for people and offering more travel choices and for work, education, leisure or healthcare.”

To accommodate the changes to Oxford Road neighbouring routes along Upper Brook Street have been improved to provide drivers with a permanent alternative route. Local access is maintained from adjoining roads and signage is in place tohelp  everyone navigate the area. TfGM has developed a map to help drivers.

Thousands of claimants failed by DWP ‘culture of indifference’