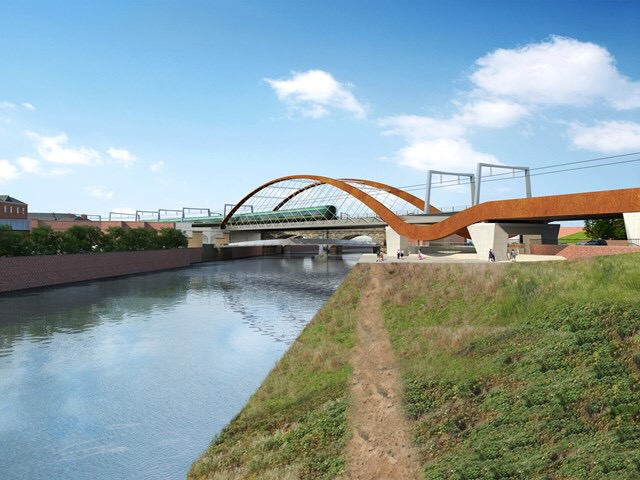 Passengers in the Manchester area are being reminded to check before they travel this spring bank holiday weekend as work to connect Manchester’s two main train stations continues.
The Ordsall Chord, which is part of Network Rail’s £1bn+ investment in the railway in the north, will link Manchester Victoria and Manchester Piccadilly stations, significantly improving connections in the region as well as reducing the amount of congestion currently seen at Manchester Piccadilly by 25%. It is due to open in December 2017.

From Saturday 28 May until the last service on Monday 30 May, there will be changes to certain train services on the Liverpool line. Additionally, services will be affected on Sunday 5 and Sunday 12 June.

There will also be temporary partial road closure to north east bound traffic on Trinity Way during the weekend while a large crane is situated on site. Diversions will be in place.

Route delivery director for Network Rail, Nick Spall, said: “Since we began work on the Ordsall Chord in October 2015, we’ve made good progress and remain on target for completion of the new line by December 2017.

“The orange army will be installing overhead line equipment, which is needed to electrify the Ordsall Chord, and removing redundant arches on the Middlewood Viaduct so we can connect the new line with the existing railway.

“I’d like to thank passengers for their patience while we carry out this work, which will improve links within the city, help deliver faster and more frequent trains across the north of England and boost the region’s economy.”

Chris Nutton, major project director at Transpennine Express, said: “The development of the Ordsall Chord is a significant step in improving the rail infrastructure and capacity in the North West and we welcome these improvement works. Unfortunately to build tomorrow’s railway we have to amend some of today’s services.

“Services between Manchester Victoria and Liverpool Lime Street will be amended for a number of weekends and we are advising customers to check the details of their journey before travelling. Customers can travel from Manchester Piccadilly on affected weekends and where possible we will look to provide longer trains to and from Liverpool.”

Alex Hynes, managing director at Northern said: “Once completed in 2017, the Ordsall Chord development will not only link together Manchester stations but it will also enable electric trains to run across the north of England. Many of our customers in the region are looking forward to the benefits these will bring to their journeys with us; more seats, faster journeys and better trains.

“Our advice to customers is to check before travelling and allow additional time where possible.”

Passengers are being advised to check before they travel at www.nationalrail.co.uk

£1.5m to be spent revamping stations between Glossop & Manchester