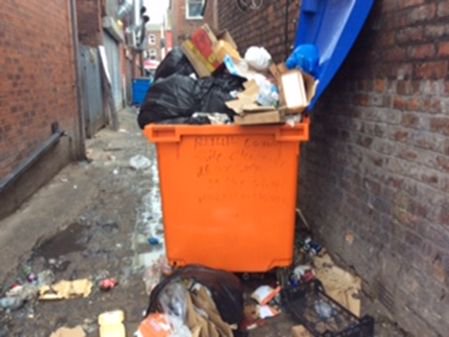 The City’s Centre’s overflowing bins are down to increases in the number of people living in the city centre and its booming economy.

That’s according to a report going to councillors in Manchester next week.

The report to be discussed by the council’s Neighbourhoods and Environment Scrutiny Committee highlights the problems that the contractor Biffa have encountered since being awarded the contract in July 2015.

Biffa have faced a number of pressures as the City’s population has increased by around 6% since the tender information was prepared. There has been growth in the apartment sector , particularly in the city centre and as this has extended through planned development.” says the report adding that:

”In recent years Registered Providers have reduced their estate management teams who previously responded to issues of domestic waste issues. Expansion of the city centre, increase in the night time economy and an increase in the number of rough sleepers resulting in high profile littering (particularly of a hazardous nature), has further stretched Biffa’s cleansing resources.”

Prior to the introduction of the Biffa contract, 40% of cleansing staff left the organisation via voluntary severance or voluntary early retirement following cuts to council spending following the government’s austerity measures in 2010 and street  cleansing frequencies were reduced from weekly to fortnightly.

Councillors will be told that there has been steady reduction in streets receiving high grades in the council’s cleaning assessments with rubbish accumulating much quicker after the streets had been cleaned due to the increase in footfall.

Air pollution is breaking our hearts: human and marine health is affected in similar...