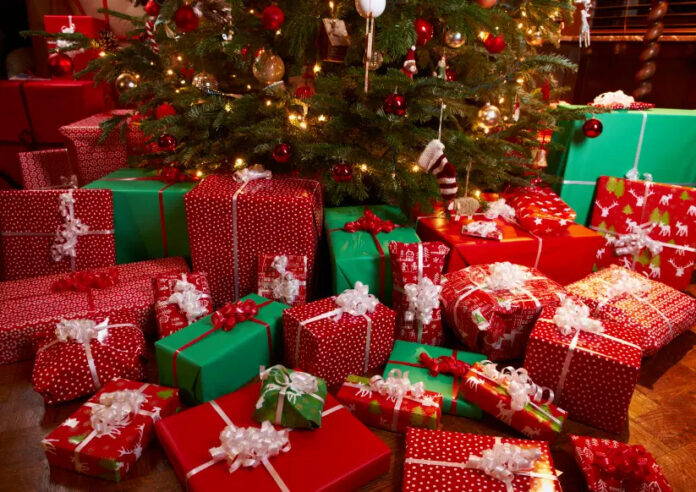 Dead plants, out of date chocolates, bad-smelling perfume, clothes that don’t fit and a diet book – just some of the Christmas presents that are most likely to end up in the bin!

As the nation starts planning for Christmas early to avoid supply shortages, new research reveals the misjudged gifts you should AVOID giving your friends and family.

The research, from the UK’s number one sharing app OLIO, found that 34 per cent thought that a dead plant was one of the worst gifts you could receive; with out-of-date chocolates next on the list (29 per cent) as well as loo roll (29 per cent);  perfume that smells awful (26 per cent) and regifting someone the same thing they gave you last year all featuring as gifts that are most likely to end up straight in the bin.

Also on the list were clothes that don’t fit (23 per cent), cleaning products (17 per cent) and a Christmas hamper from the year before (13 per cent).

More than a fifth (21 per cent) of Brits have been miffed to receive a diet recipe book, while more than a quarter (26 per cent) have received perfume or aftershave that smells awful.

Fourteen per cent have been given books they’ve already read, 12 per cent have been disappointed to open a present containing deodorant, and one in 10 (10 per cent) have had to pretend they find the comedy mug they’ve received hilarious.

The study into Christmas gifting habits found that more than four in 10 (41 per cent) Brits admit to having thrown unwanted presents in the bin after the big event, with an impatient 36 per cent throwing them away while doing a big Boxing Day clean up.

Sharing their spare isn’t second nature to everyone yet, with 16 per cent of Brits throwing away an unwanted present without checking to see if anyone they knew might like it.

Brits buying for other people’s kids should also beware. If you want to stay friends with their parents, do not give a child a whistle (15 per cent), a noisy musical toy (12 per cent), a drum kit (12 per cent) or a violent video game they are too young to play (13 per cent). The research also found shoppers should avoid giving small children plastic toys consisting of hundreds of pieces that their parents will spend hours picking up.

More than a quarter (26 per cent) of mums and dads have disposed of unsuitable, ugly or noisy presents given to their children by either chucking them in the bin or taking them to the tip.

Overall, a staggering 85 per cent of parents believe their children receive too many presents at Christmas which could be contributing to the 8.5m new toys that are thrown away in the UK every year[1]. The general population seems to agree, with 90 per cent believing gift buying has gone too far, and we’d all be better off giving fewer presents during the festive season.

Tessa Clarke, co-founder of the OLIO app said, “Our research quite clearly reveals how we need to be more thoughtful with our Christmas shopping, not just for the sake of our friends and family, but for the sake of the planet too.

UK households generate a staggering 30m tonnes of waste every year – around a tonne per household and Christmas is our most wasteful season. Ensuring we give fewer, more considered gifts, is key to ensuring they do not end up in a landfill. We’d also encourage everyone to upload any unwanted gifts to the OLIO app, as we all know that one person’s trash is another’s treasure. With the rapidly accelerating climate crisis, it’s more important than ever that we don’t waste our wonderful world, and that we share more and waste less this Christmas.”

The study also found that 46 per cent of Brits have given Christmas presents to family and friends that they know in their hearts they won’t like.

A third (34 per cent) said the pressure of trying to buy new things for those in their lives was overwhelming, and they often made last-minute purchases that they later regretted.

A further 28 per cent claim when they have no idea what to buy someone, they choose something they would like to receive. A passive-aggressive 18 per cent has deliberately bought someone a gift they know they will hate.

The research also uncovered a list of nostalgic gifts and toys that people wish they’d never thrown away, which included Barbie dolls (19 per cent), My Little Pony (14 per cent) Star Wars toys (13 per cent) and Transformers (13 per cent) .

OLIO is best known for its work tackling food waste, but has since developed into a wider neighbourhood sharing app. It allows users to pass on unwanted items from around the home, from food to furniture and clothes to cookware. OLIO makes it incredibly easy to give away unwanted items to neighbours, with half of all food added to the app requested in under 30 minutes, and half of all household items requested in under four hours.

The OLIO app today launches a new advert, filmed at a landfill in south Wales. The ad, which includes a choir of children singing ‘What a wonderful world’ against the backdrop of the landfill, shows the devastation of humanity’s wasteful culture.

Tips to have a more sustainable and less wasteful Christmas

As threats of empty shelves at Christmas dominate the press and the world’s leaders meet this week to find a way forward to mitigate the worst effects of climate change, could be the right time to rethink Christmas?

More than 85% of us feel we go too far with our gifting at Christmas, according to new research by OLIO, the UK’s number one sharing app. Here, Tessa Clarke shares her tips on having a more sustainable, less wasteful Christmas.

Four promotions for online bettors that are worth it