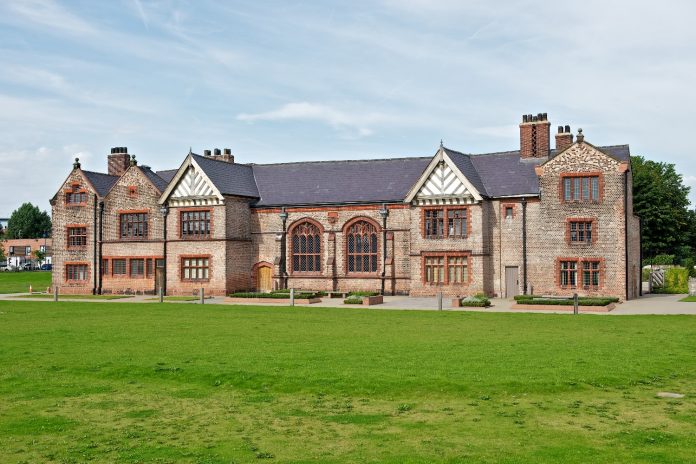 Following the sell-out success of last summers’ outdoor theatre events at Salford’s stunning tudor manor house, and to complement this year’s ongoing fine weather, this summer there are eight stunning, open-air theatre shows booked to perform at Ordsall Hall including performances for families and people of all ages.

First to take the open-air stage will be The Three Inch Fools, a national touring company acclaimed for their fast-paced and musically driven approach to Shakespeare, on Thursday 21st June 7-9.30pm, performing Hamlet.

The five-strong company of Fools bring Shakespeare’s most iconic and beautiful play vividly to life in this new production, in their traditional fast-paced style, with a vibrant and inventive depiction of Hamlet’s world set against a bubbling soundscape of Scandinavian folk and musical drama.

Tickets are still available for this play and there is the recent addition of a pop-up gin bar provided by Gin Meister. Tickets from £10 (plus booking fee). Guests can bring their own chairs, rugs and refreshments or pre-order a picnic for an extra £8.95 per person. Doors open an hour before the show starts.

Pride & Prejudice follows on July 18th 7.30-9.30pm performed by Heartbreak Productions who make their first visit to the stunning gardens of Ordsall Hall to perform Jane Austen’s classic. Join Heartbreak and a host of charming young bachelors (yes, Mr Darcy will be there!) for an evening of comedy, romance and more than one come-uppance plus pop-up gin bar.

On July 26th the world’s first cycling theatre company, The Handlebards return to Ordsall Hall to perform Twelfth Night. The all-male company pedal from venue to venue with all the set, props and costume necessary to perform environmentally sustainable Shakespeare across the globe. In usual HandleBards style, expect riotous amounts of energy, a fair old whack of chaos, and a great deal of laughter.

For families with children, on the 9th August Folksy Theatre returns to the gardens of Ordsall Hall to perform the children’s favourite The Princess and the Giant at two performances at 10.30am and 2.30pm. The family friendly performance will be filled with music, puppetry and wonderful characters and is one not to be missed.

For more information go to www.salfordcommunityleisure.co.uk/culture/open-air-theatre

Get Ready to Party… Rave-A-Roo is coming to Selfridges Trafford!

Aslan arrives at The Lowry, suspended majestically in the main foyer

The Killers will be playing Manchester Arena later this year