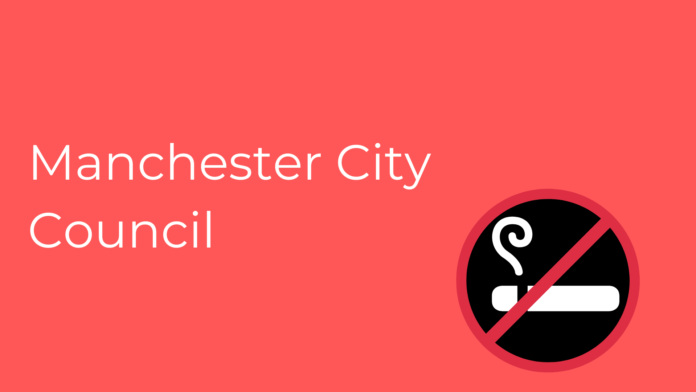 Pop-up seating brought in to support Manchester businesses get back on their feet following the nationwide lockdown will be made smoke-free zones.

In the run up to July 4, when the hospitality industry was allowed to reopen, a series of measures were rapidly put in place in Manchester to allow businesses to trade on pavements and roads ahead of the legislation formally facilitating this.

Now that the Business and Planning Act 2020 has come into effect, Manchester City Council will now require all businesses who are temporarily trading under a ‘pavement licence’ to ensure that their seating areas are smoke free.

While national legislation requires premises to set aside an area for smokers, the Council has decided to take a step further in line with its ambition to cut the number of smokers in Manchester.

Furthermore, with 6,000 smoking-related hospital admissions per year it is clear that there is much more that can be done to reduce the number of smokers in the city.
In light of new Covid restrictions that were put in place across Greater Manchester on July 30, it is important to note that people are still able to go to pubs and restaurants with members of their household.

In line with the national guidance, you can continue to meet in public outdoor spaces in groups of no more than 6 people, unless the group includes only people from 2 households.

At all times, you should socially distance from people you do not live with – unless they are in your support bubble.

Councillor Rabnawaz Akbar, Executive Member for Neighbourhoods for Manchester City Council, said: “The introduction of outside seating for the hospitality sector has been a positive step over the past few weeks. We are seeing the public enjoy a degree of normality, and we are also seeing our businesses pick up following the devastating impact of the lockdown. Many have fed back that the additional provision has saved their business.

“However, we have not endured one health crisis to sleepwalk into another. We know that in Manchester there are still too many people smoking and we want to play our part to ensure that the city is a place where smoking is not a cultural norm.

“Smoking is not only terrible for our health but is also an unpleasant thing for bystanders to endure. I am sure that after months inside the last thing people want is a face full of smoke when trying to enjoy a meal or drink.

“It should be said that progress is being made although slower than we’d like to see. Between 2017 and 2019 the number of people aged 18 and over who smoked fell from 22% to 18%. But, this is still too far off the national average of 13%. We want to get to this target, and decrease it still further.”