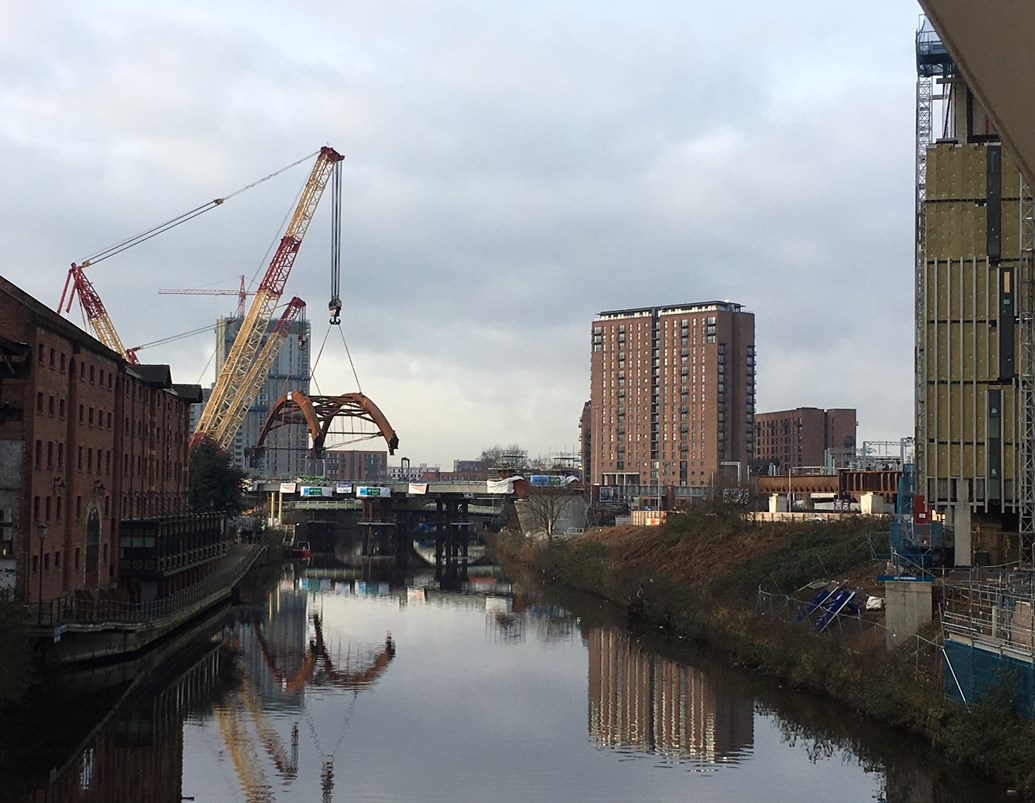 A scheme to connect Manchester’s main railway stations moved a big step closer towards becoming a reality today as two arches weighing hundreds of tonnes were dramatically craned into place.

The arches are the centre-piece of the Ordsall Chord, transforming the Greater Manchester skyline forever and once complete in December 2017 the Ordsall Chord, a 300-metre length of track, will link all three of Manchester’s main stations – Piccadilly, Oxford Road and Victoria for the first time .

Today’s moment is steeped in historical resonance. Ordsall’s location is the birthplace of modern intercity railways. In September 1830 ‘father of railways’ George Stephenson opened the Liverpool-Manchester line, which ran adjacent to the location of the arches which were lifted into place today.

Rail Minister Paul Maynard said: “I’m delighted this crucial step has been completed successfully. The Ordsall Chord is a key part of the government’s £1bn-plus investment in upgrading the rail infrastructure across the North of England.

“These improvements are at the heart of our plans for the Northern Powerhouse. This is a demonstration of our commitment to deliver change that passengers want, such as increasing direct links between Manchester, Liverpool, Newcastle and other cities, providing more room and faster, more frequent services by 2020.”

Customers as far afield as Newcastle will benefit from reduced journey times. The chord will enable new direct links to Manchester Airport from locations including Rochdale and Bradford. Trains will be able to run from Macclesfield, Greenbank and New Mills in Cheshire and south Manchester.

The River Irwell crossing will be the first arch bridge of its kind in the UK. The design uses inclined hangers which cross each other at least twice instead of vertical hangers, which allows for a more elegant design that is thinner and uses less material. This is particularly important due to the proximity of Stephenson’s bridge, built in 1830.

Two huge bridge arches, weighing 600 tonnes and designed and constructed in Greater Manchester, were lifted and fixed into position forming a new bridge.

The crane used to install the arches is the largest in the UK and one of the biggest in Europe.

The crane was constructed at the work site next to the River Irwell, which links Manchester and Salford, after its component parts were delivered by 35 wagons.

Programme Manager Allan Parker from Network Rail said: “This latest piece of work signifies we are getting ever closer to the Ordsall Chord being completed. Once finished, passengers from across the north will have more direct services to Manchester Airport and a reduction in congestion due to some services from the east being rerouted through to Victoria station first. This will mean an increase in services as more trains will be able to run to Piccadilly.

“As you can imagine, the sheer size of the arches and the accuracy needed to position them meant there was a lot of planning that took place previously. I have been working on this project from the very beginning and I am extremely proud of every milestone we have achieved. However, the sight of the arches elevated over the River Irwell was very special and will live long in my memory.”

David Brown, chief executive of Transport for the North, said: “This new rail link in the heart of the North is among the first of many major changes that will help transform connectivity and give people more choice around where they live and work. It is exactly the sort of initiative that Transport for the North is encouraging across rail, road, air and water – a project that unleashes new potential and which will help the North to grow its potential.”

Last undeveloped site at Salford Quays set to be built