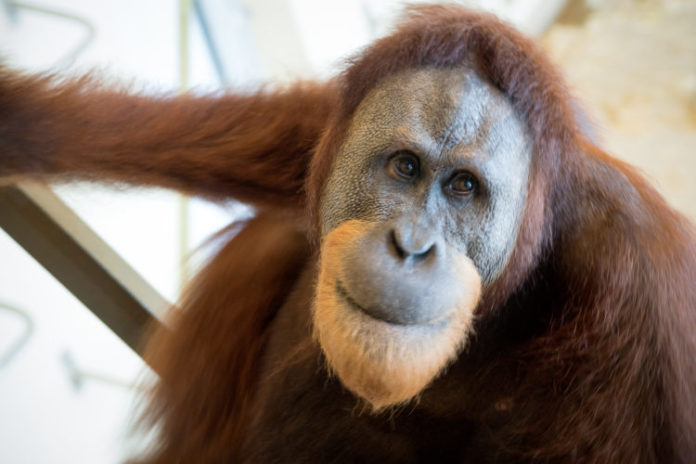 New research, led by scientists from the University of St Andrews and Indianapolis Zoo, shows that great apes can control their voice in a similar way to humans, giving a unique insight into the evolution of human language.

The research, in collaboration with the University of Durham, published in Scientific Reports reveals how orangutans can control their voice in a similar way to humans. Working alongside animal care staff and researchers at the Indianapolis Zoo, the team studied then 11-year-old Rocky and 36-year-old Knobi, analysing how the orangutans used their voice to play a basic musical instrument.

By giving these to orangutans, researchers were able to determine that our nearest ape relatives have good levels of voice control, allowing them to produce voiced sounds beyond their natural repertoire. This basic capacity is what allows humans to learn the vowels of our mother tongues and the new voiced sounds of second languages.

Membranophone activation was successful within minutes after first exposure, precluding that it developed out of training or conditioning. The research demonstrated that novel vocalisations in orangutans is indeed the product of vocal fold action and that orangutans can adjust their voice frequency and duration features rapidly and meaningfully. Therefore, voice control in great apes is only different from humans’ in degree, not kind.

Lead researcher Dr Adriano Lameira, from the at the University of St Andrews, said: “Language defines human communication, but its evolution defies scientific explanation. Great apes, our closest relatives, may hold the key to how language evolved in our lineage. Our results provide the first positive diagnostic test of vocal production learning in great apes, namely active voicing, during novel voiced vocal production in orangutans.”

“This important study redefines our understanding of how spoken language may have evolved.  It also demonstrates that the abilities of orangutans, and likely all great apes, have been greatly underestimated,” said Indianapolis Zoo President Dr Rob Shumaker. “This new knowledge compels us to have a stronger conservation ethic at a time when all wild great ape populations face serious threats to their survival.”