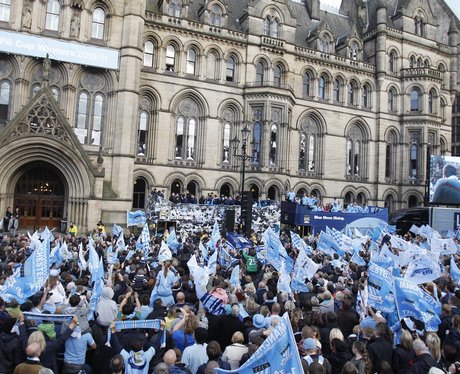 A parade will be held on Monday, 14 May to celebrate Manchester City FC’s Premier League victory, and Carabao Cup win, it has been confirmed.

There will be an open top bus tour with Pep Guardiola’s title-winning squad departing at 6.15pm from Victoria Street, behind Cathedral Gardens before taking a 1.5km route through Manchester city centre, finishing on Deansgate.

Players will be presented on stage at the end of the parade route, on Deansgate close to the junction with Peter Street, at approximately 7pm. For anyone wishing to watch, this is on a non-ticketed, first come first served basis.

Sara Todd, Deputy Chief Executive of Manchester City Council, said: “City have won this year’s title with real style, playing some incredible football along the way, and making the 2017/18 season one that their fans will never forget.

“The Council are pleased to support this event and we expect tens of thousands of fans to take to the city centre streets to see their heroes and the all-important silverware.

“Having successful teams is good for Manchester as a whole – attracting visitors, supporting jobs, projecting prestige and above all spreading joy”.

Commenting on the parade Manchester City Captain Vincent Kompany said: “The support from our fans throughout the season has been fantastic, so I’m delighted that we’ll have the opportunity to celebrate with them in the city centre after what has been an unbelievable Premier League campaign”.

Two women who tortured pensioner while high on booze are jailed