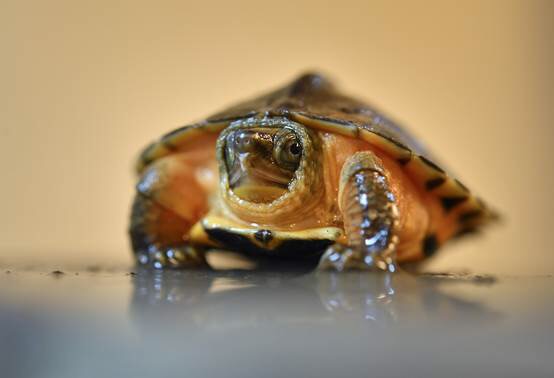 The Chinese three-striped box turtle, a critically endangered species, emerged after an 85-day incubation period.
Despite their name, Chinese three-striped box turtles are not only found in China but also in Vietnam, Hong Kong and areas of Laos and Myanmar. They are regarded by conservationists as one of the top 10 most threatened turtles on the planet.

The zoo’s new youngster hatched weighing just 18g. Keepers have named it Satsuma in reference to its tiny stature and soft orange and yellow colourings.

Ben Baker, team manager of lower vertebrates and invertebrates, said:
“The Chinese three-striped box turtle is one of the most beautiful turtles in the world, owing to its bright colour patterns.

“Sadly though, they are a victim of their good looks and, like many other turtle and tortoise species across South East Asia, they have undergone a monumental decline in recent years due to overexploitation for the southern Asia, particularly Chinese, food markets.
“Chinese three-striped box turtles have also suffered particularly badly because of their perceived medicinal properties, which has led to an enormous increase in demand for the animals and subsequently the prices they fetch on the black market. On top of this, they are also highly sought after by the pet trade.
“Hopefully our new little arrival can help us to shine a spotlight on the issues that the species is faced with and bring some fresh hope in the fight to haul the species back from the brink.”
Chester Zoo is currently part of efforts to breed safely net populations of 10 of the most at risk of extinction turtle species in the world and also works in Sumatra and Philippines where it is helping to protect nesting areas and habitat for critically endangered species.