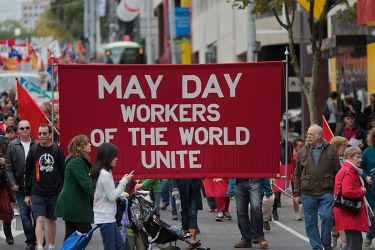 This May Day, workers face the worst real-terms incomes squeeze in 50 years. As many of the UK’s biggest companies enjoy booming profits, ordinary people are experiencing an unprecedented assault on their economic security and financial well-being as wages and benefits fail to keep pace with the rising cost of living.

A new report from the Common Wealth Think Tank says that at the same time, the pandemic has exposed and sharpened the deeply gendered and racialised faultlines along which work – paid and unpaid – is organised.

Across the economy, they say,from care sectors to retail and hospitality, the inequalities that the organisation of work generates are clear to see. None of this is natural or inevitable.

It is the result of deliberate political choices: choices in how work is organised and on whose terms, choices in how employers and policymakers have responded to rising costs and whose interests to prioritise, choices in terms of the purpose and operation of our economy.

Their analysis say it is time we choose a different future. That means a serious strategy for boosting real incomes, both wages and benefits.

“And it means challenging rentier power that extracts money, from eye-watering childcare costs to exploding energy bills, from hard-pressed households channelling it to wealthy investors. At the heart of that must be a new Employment Bill – much promised, long-delayed – that rebalances power at work.”

The need ,they say, is urgent.

”As real incomes are eroded and insecurity grows, we are less free in work, and we have less freedom outside of work. The cost of living crisis is, then, also a crisis of working time: we work more hours to meet rising prices as our time is not properly rewarded, many do not have control over scheduling, forced to accept shifts at short notice or unsuitable hours, and at work, the pace of work is set from above, with digital surveillance of workers becoming increasingly normalised in the wake of the pandemic.”

They recommend a restoration of sectoral collective bargaining to rebalance power and boost wages,takin back control of time by boosting workers’ rights in the Employment Bill and the introduction of a Living Income social security system to guarantee economic security for all.

We should reform the rules of the company to give everyone a stake and a say, and organise care as a public good free at the point of use to reduce unpaid work and gender inequalities.

Coronavirus Latest-Europe the epicentre of the pandemic, UK cases rise by 208, Spain declares...