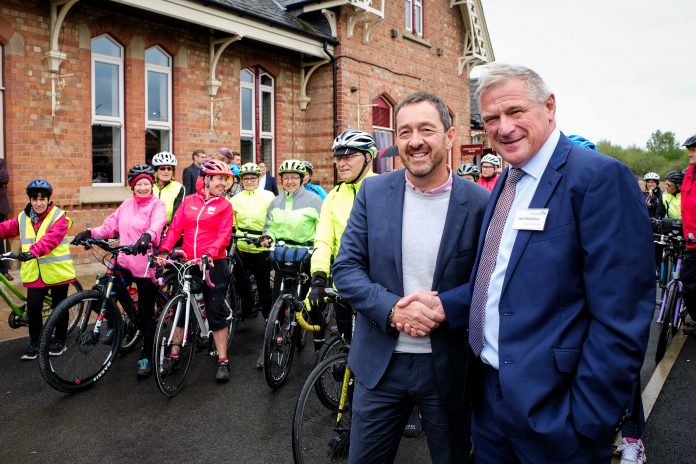 Olympian and Cycling Tsar Chris Boardman, MBE, has opened a cycling network in Salford which it is hoped will one-day inspire a Dutch-style bike revolution across the area.

The Olympic gold medallist and Greater Manchester Cycling and Walking Commissioner met local cycling groups at Irlam Station as they set off on an inaugural ride along the first 14km of the Irlam and Cadishead Cycle Network, which runs from the station at Irlam to the Boathouse in Astley.

The Irlam-based charity Hamilton Davies Trust (HDT), which led on work to set up the new cycle network, hopes the launch will kick start ambitious plans to expand it to around 50kms of routes across the area, including the expanse of Chat Moss.

The opening is also a step towards reviving 9.5km (6 miles) of disused railway track which could be part of the national cycleway extension as well as a heritage railway carrying steam and diesel trains between Irlam and Timperley.

Last year, HDT launched a proposal for a £30m project to re-open a section of the former Cheshire Lines Railway, which included the re-opening of the Cadishead Viaduct along the route, which is closed off by shipping containers, separating the communities of Irlam and Partington.

HDT ultimately hopes that the new cycle network will help the area contribute to the target of 10 per cent of journeys being made by bike by 2025, which has been set by Sustrans and the Greater Manchester Combined Authority (GMCA).

Chris Boardman said: “I was really impressed by the commitment HDT is making to encouraging people to get out on their bikes across Irlam and Cadishead.

“People will only take to cycling if it is accessible and easy for them to incorporate into their day. Initiatives like this are key to helping to inspire new people to travel without a reliance on cars and I look forward to seeing how further plans develop to open up more cycling routes locally.”

HDT founder Neil McArthur said: “This event lays the foundations to develop cycling further across the area, which has a fine blend of urban and rural countryside and is a great location for cyclists.

“We hope in years to come to develop an extensive network of cycle routes, which will encourage local people to get on their bikes as well as attracting many tourists and visitors.

“We’ve been inspired by the Dutch model and we have ambitious aspirations that one-day cycling could be just as popular in Irlam and Cadishead as it is there.”

The charity has worked with Salford City Council to map the new cycle network and install waypoints and directional signage, based on the Dutch cycling model.

It has also worked with TfGM, Cycling UK, the Doctor Bike Surgery, the Carbon Landscape Trust and Manchester Bike Hire to promote cycling in the local area.