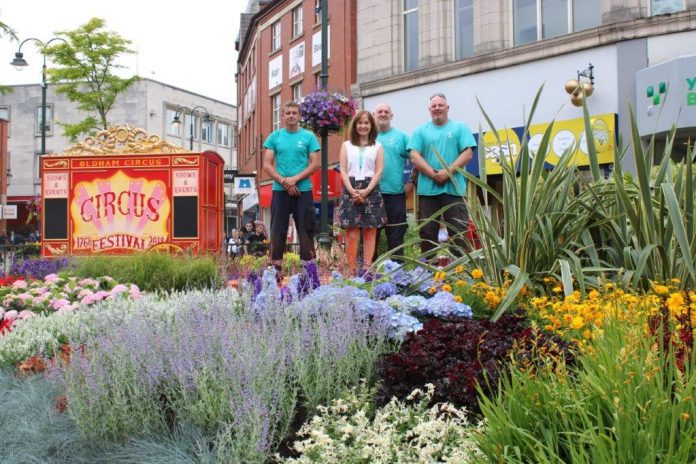 Oldham has stolen the show at the Royal Horticultural Society’s prestigious North West in Bloom awards.

For the ninth year in a row our entry – Bloom and Grow – has scooped the prize for Best City (based on the size of the electoral), plus the Gold award.They also also won the Best Town Centre Award, hitting the Gold standard once again.

The awards took place at a ceremony held in Southport on Friday, attended by community gardeners from across the region.

The theme for this year’s campaign was ‘Greening Grey Britain’ – which encouraged residents to grow plants and flowers where ever possible. Working with our communities is a key part of our campaign and brings many benefits.

The RHS judges were extremely impressed with the town and how we’d taken the overall theme and also incorporated our designs and displays to coincide with Circus250, a national campaign celebrating 250 years of circus.

This year’s judging route started in Failsworth and made its way into the town centre, where the WOW bed centrepiece featured a circus waggon and stage, colourful flower displays and even performing circus acts.

The WOW bed display is currently in a transitional stage to mark Halloween and will transform again into a Christmas wonderland.

Councillor Arooj Shah, Cabinet Member for Neighbourhood Services, said: “To win Best City for nine years in a row is an outstanding achievement and a real honour for our borough.

“The displays we produced impressed the RHS judges and hopefully made a lot of people smile.

“Our Bloom and Grow campaign is a real team effort and it wouldn’t be possible without the hard work of our dedicated Environment Team, volunteers, residents, schools, communities and businesses.

“We’d like to thank everyone for doing their bit, coming together and helping us bring this trophy back to Oldham once again.”

Hilton hosts the Star Ball and this year is teaming up with Stockport children’s...